Even though there are many Easter egg hunts throughout Santa Clara leading up to Easter Sunday on March 31, perhaps the most meaningful is the hunt held at Santa Clara’s JW House. On March 24, over 200 former guests and friends of the home arrived at 11 a.m. for the Second Annual JW House Easter Egg Hunt.

“It’s amazing,” said Executive Director Jill Mitsch. “Seeing the kids [whose families stayed at the home during a medical crisis] two, three years [after treatment], running around and getting eggs – just really being a part of JW House’s past, present and future – is great. We just love it. We love seeing our families again.”

Children and their families dined on a breakfast of French toast, frittatas, eggs, bacon, and sausage prepared by certified chef and JW House Board President Andy Kryder. Hobee’s Restaurant donated coffee cake and Starbucks provided coffee for the event.

After eating, guests were visited by the Easter Bunny, who led the children on an Easter egg hunt. Buried within the hundreds of eggs scattered throughout the home’s back yard were a handful of golden eggs, which allowed the lucky finder to receive a larger prize. Once they gathered a maximum of eight eggs, the children were each given the opportunity to have their photo taken with the Easter Bunny – a service donated to the house by The Family Album Project.

While photos were being taken, there was plenty to do. JW House volunteer Dawn Lucero organized four crafts for the families to create. There were coffee filter butterflies (coffee filters that could be colored with watercolors, sprayed with water to create blending and attached to a black pipe cleaner to create a butterfly), bunny photo frames (paper plates, cut and decorated with cotton balls to look like a bunny), pinwheels (pencils decorated with colored paper to create a pinwheel), and flower pots (pots children filled with soil and seeded; so that with a little care, they will have their own flowers). Additionally, there were bunny sack races, which allowed children and adults to compete for candy prizes. 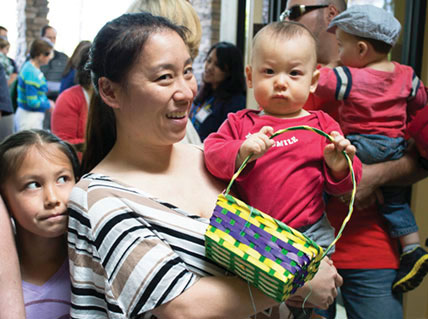 “It does raise some funds, but it’s really just to have a day in the spring to have families who have stayed at JW House and people who are supporters of JW House get together,” said Mitsch. “I see a lot of familiar faces. And, we probably had about 15 families who have never been to JW House come here to learn about our programs.”

The event was hosted by the newly formed JW House Young Professional Advisory Committee, a fundraising group of professionals in their 20s and early 30s. “They are just doing phenomenal things for JW House and we look forward to seeing what they’re doing in the future,” said Mitsch.