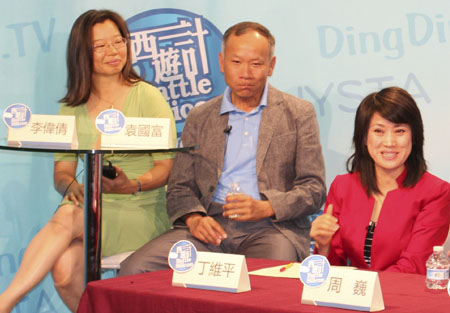 In early May, Ding Ding TV and Hua Yuan Science and Technology Association (HYSTA), hosted a press conference to introduce the media to the judges and contestants of Battle Silicon, a Chinese American reality television show where representatives from start-up companies compete for the chance to win a variety of opportunities that can help them improve their business prospects.

“They are competing for a number of benefits; obviously number one is media exposure,” says Leslie Yuen, advisor at HYSTA and founder of Globalization Training Office. “We also have six judges who can offer one on one coaching and funding opportunities. Our judges are venture capitalists and experienced entrepreneurs.”

“I hope we could help those start-ups; we have contacts in China and I’m willing to help the winners by introducing them to these contacts,” says Diana Ding, owner of Ding Ding TV and a member of the Santa Clara Chamber of Commerce. “The reason I’m doing this show is because [I know how it’s like to run a start-up]. I believe that Ding Ding TV is the first Chinese American internet TV studio in Silicon Valley. We’re probably even the first one in the United States.”

The goal behind producing Battle Silicon is to foster some strong and positive relationships between people in United States and China in the technology arena.

The show will be taped at the studio for Ding Ding TV, which is based in Santa Clara. Each episode will feature contestants presenting business plans and their problem solving abilities to judges.

The first episode of Battle Silicon will be released on June 15th on www.dingdingtv.com and KMVT Comcast 90. On the first episode, a fair portion of the show will be in English.

WWII Navy WAVES Veteran Writes about the Blessings of Her Life