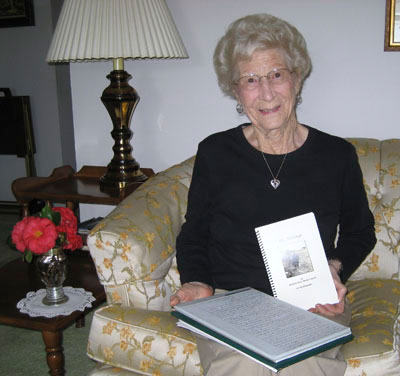 “I was anxious to see this big, beautiful world and could not wait for the doctor,” she writes in “My Blessings,” her slender autobiography, written in longhand over a period of two years and available in the genealogy section of the Central Park Library.

The first of four daughters, Connell was born in 1922 at home on a farm in North Dakota to Olive and William Dickie, a Scottish immigrant and WWI veteran, whose example of service she would follow.

It was 1944, and America was at war. There was a shortage of teachers, so although Connell had not finished college, she taught on an emergency basis in a one-room schoolhouse—until a single question changed her life.

“My dad asked me, ‘Have you ever thought of joining a service?'” says Connell. “Without sons, he kind of felt that he wasn’t doing his part in Europe.” His words were the encouragement she needed.

“I really wanted to do something for my country during those years when everyone was behind the war effort,” says Connell. So just before her 22 birthday, she joined the Navy WAVES—Women Accepted for Voluntary Emergency Service.

Connell served in the hospital corps as a nurse’s aide from 1944 to February 1946, first in Farragut, Idaho, and then Oahu, Hawaii, where she cared for patients who had been prisoners of war in Japan.

After WWII, Connell married George Duane Connell, a high school sweetheart. George served in the Navy for more than 20 years, and they settled in Santa Clara in 1954.

“We scraped the bottom of the barrel to get a $250 down payment for a new house,” recalls Connell, seated in the living room of that now 59-year-old house. As she leafs through her autobiography, she remembers her blessings.

“Everyone should leave their life story in print for their families and generations to come,” she says. “Do it while you can still remember things.”