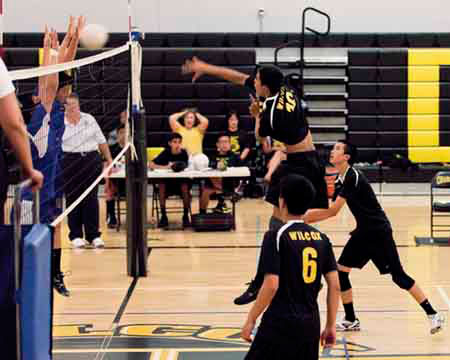 It took four games, but the Wilcox Chargers beat the Santa Clara Bruins in boys volleyball on May 1, the Chargers’ Senior Night.

After dropping the first game 25-21, Wilcox focused and came back with a vengeance to top the Bruins 25-15.

With the games tied at one, it was still anyone’s match to win, but it would be a battle for Santa Clara which was playing without its star middle blocker, senior Connor James.

Santa Clara senior Wing Chan started serving in game three. An ace, kill by senior Roger Kim, and defensive error by Wilcox got the Chargers off to a quick 3-0 lead, but that lead wouldn’t last. Wilcox sophomore Kenny Pham got the serve at 6-5 and scored four unanswered points to jump ahead to a 10-5 lead. Junior Richard Won took over at 18-11 after a kill by junior Kenny Dipko. Junior Rubal Singh killed, Charger junior Erwin Vergonio missed a kill and Singh dominantly spiked the ball before Kim got the ball back into the Bruins’ hands at 21-13. But, kills by Dipko, junior Raj Singh, and senior Mo Iese gave Wilcox a game point at 24-13. A Santa Clara miscommunication after the ball bounced off the ceiling gave Wilcox a 25-13 victory.

The final game was evenly matched, with both teams taking the lead for a point or two before Rubal Singh was given the ball at 17-14. A kill by Rubal Singh, and a pair by Dipko caused Santa Clara to use a timeout. An out of bounds ball and ace put Wilcox ahead 22-15. Santa Clara tried to bounce back, but serving and hitting errors plagued the team and gave Wilcox a final third game victory of 25-17.

“It feels great [to win],” said team captain Iese, who had about 20 family members cheering him on and will be attending the University of Santa Cruz where he will play libero (defensive specialist) next season. “It’s overwhelming that we beat them. We lost the last time we played but we tried to stay focused and keep pushing.”

“Our coach [Ululani Pomroy] told us to stay focused and [that] we couldn’t lose our focus,” he continued. “We’re a very versatile team and when we lose our games it’s because we can’t stay focused. All we had to do was stay focused and push through.”

To prepare, the team spent two days a week at senior Chad Anderson’s house watching YouTube videos of other teams and learning new plays. “I had a great time with this team – a lot of memories,” said Iese. “I’m going to miss the Singh twins and Dipko. I can’t play without those guys.”