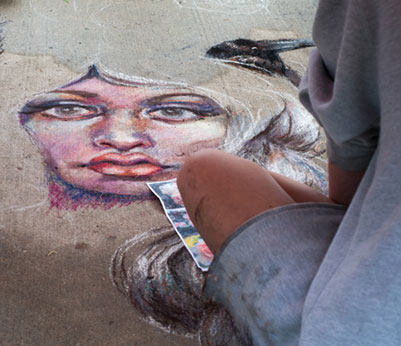 When most people hear the word “chalk,” the word “art” doesn’t usually follow it. The phrase “chalk art” simply doesn’t exist since chalk is typically used for kid’s games, or in school. But on September 21, at Luna Park in San Jose, disbelievers in chalk’s artistic potential would have been in for quite a surprise.

The Luna Art Chalk Arts Festival is both an education and annual nonprofit event organized by volunteers to increase support for the arts in local schools and the community. Many of the artists featured are from the Luna Park Neighborhood, and many see it as their chance to give back to their community. 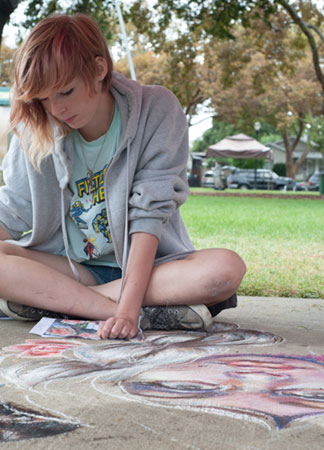 The event, now in its sixth year, started in 2008 and is growing by leaps and bounds. This year, 200 artists pre-registered; and even with cloudy skies and rain in the forecast, approximately 75 more people signed up at the start of the event. The crowd easily exceeded 1,000 people. Unfortunately, the rains dampened some people’s enthusiasm. Some artists completed their work only to see it nearly washed away in the, at times torrential, downpour.

However, not all of the work faded away. According to Katrina Loera, President of the Luna Park Arts Foundation, “The rain was unexpected but some of the artists don’t mind since it makes the chalk react differently and some of the work takes on a different look.” That was the case with Loera’s depiction of a homeless man in San Jose, which took on an almost ghostly appearance.

The featured artist for 2013 was Amelia Eaton, whose 2012 work was selected for the event poster. Eaton, a 17-year old senior at San Jose High School, was fortunate to have a canopy so she could continue her work, despite the foul weather. Her work was a beautiful rendition of a woman’s face. Even as the skies opened up late into the afternoon, Eaton was still hard at work.