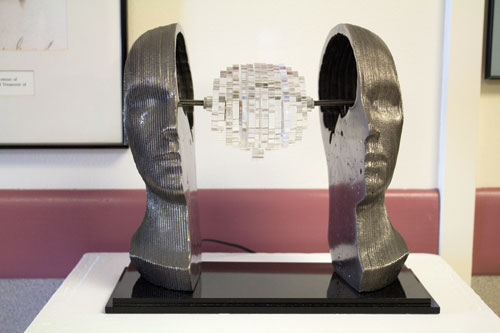 In each of the last seven years, Santa Clara’s City Hall has been transformed into an art museum showcasing some of the best sculpture around. On Sept. 28, city offices were again turned into a gallery for the seventh annual Biennial Indoor Sculpture Exhibition.

“I’m absolutely thrilled to have seen the growth over the years,” said Santa Clara Mayor Jamie Matthews. “Santa Clara is becoming very much a destination for fine art…In Santa Clara we value our arts and we love our arts.”

Throughout City Hall, 47 different sculptures, from metal work to mixed media and ceramic to wood, lined the walkways. While members of the public perused the hallways, Girl Scouts from Troop 61148 in Santa Clara passed out programs and directed people to the pieces they wanted to see. Mission College Symphony participated in the event with live music, and guests dined on hors d’oeuvres while waiting for the awards ceremony to start.

Members of the Cultural Advisory Commission, with a little help from curators at the Triton Museum of Art, reviewed over 100 submittals and narrowed it down to the pieces presented. They then tackled the task of picking a handful of merit award winners and the top three best-in-show pieces.

Taking third place and a check for $100 was “Time Piece,” a bronze figure on a bicycle, by Steve Davis. In second place was Chai H. Ng with her giant laminated plywood tornado-like sculpture, “Woodshop Potpourri-Twisters,” and in first, receiving a check for $300 was an ornate bronze sculpture, “Mutual Support,” by Richard Lipes.

The exhibition, which will be on display until February 2014, can be seen by visiting Santa Clara City Hall, 1500 Warburton Ave., Monday through Friday from 8 a.m. to 5 p.m. City Hall is closed on weekends and holidays. To see a brochure featuring all of the works on display, visit the Triton Museum of Art, 1505 Warburton Ave. (across the street from City Hall).

Uncovering Art of the Street

Literature and Art: Triton Discusses To Kill a Mockingbird

Arts & Entertainment
Author Melissa McKenziePosted on March 2, 2011
Lying just on the outskirts of Santa Clara surrounded by private homes and a junior high is a curious-looking building with gold doors, painted...
Arts & Entertainment
Author Karl ScottPosted on April 13, 2011
This film is a SciFi adventure. If SciFi is not your favorite, this film may not be for you. On the other hand, this...
SPONSORED