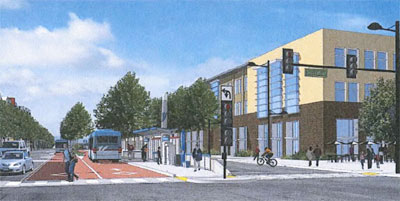 Would you rather spend an afternoon strolling the Champs Elysees or the El Camino Real?

Imagining the El Camino reaching the heights of Paris’ grand boulevard is hard. But its central place in California history – “the royal road” connecting the 21 Franciscan Missions, and the first paved highway on the Peninsula – deserves better than contender status for Planetizen.com’s Worst Streets in North America.

The regional Grand Boulevard Initiative by 19 city, county, and regional agencies aims to transform the El Camino from its present identity as an automobile strip-mall thoroughfare into a more bike-pedestrian- and rapid transit-friendly environment.

Part of that initiative is Valley Transit Authority’s (VTA) Bus Rapid Transit (BRT) plan for the El Camino. BRT can deliver speed and efficiency close to rail systems’, with the flexibility and lower cost of bus transportation. The first BRT systems were built in South America in the 1970s. U.S. cities with established BRT systems include Pittsburgh, Seattle, metro NYC, and Los Angeles.

However, the plan requires reducing El Camino’s auto lanes from six to four, to gain two dedicated center bus lanes between Lafayette Avenue in Santa Clara and Showers Drive in Mountain View, and bike lanes on each side. Stations will be in the median, similar to the county’s light rail system. The VTA seeks funding for the $240 million project from the U.S. Federal Transit Administration’s Small Starts Program.

The new system will feature more than simply the time- and emissions-saving benefits of a dedicated right-of-way. “It’s an opportunity to re-imagine the El Camino,” Santa Clara Planning Director Kevin Riley told the City Council at the March 27, 2012 meeting, noting that El Camino BRT is part of Santa Clara’s 2010 General Plan.

While no one underestimates the challenge of separating Californians from their cars, the presence of effective mass transit encourages transit-oriented development, so that new city residents will have real alternatives to getting in the car. “We can ultimately build a population around rapid transit,” noted Riley.

But these benefits come at costs some say are too high.

Critics attack the plan as anti-auto; arguing that the dedicated bus lanes will increase congestion and delays for motorists. Others assert that crossing El Camino will be less – not more – safe. And some question the project can be completed in the time or budget currently planned.

Some businesses worry that a two-year construction project will drive away shoppers, and limited stops will make their businesses inconvenient.

These worries are shared by the Mountain View City Council, which has twice voted 4-2 against the dedicated bus lanes. “I’m a huge fan of BRT,” Mountain View’s then-Mayor Jac Siegel told a 2011 hearing. “It’s good; I’ve used it in other cities. But it’s got to fit your area.” Critics responded by accusing Mountain View officials of NIMBYism.

And at least one Bay Area conspiracist labels BRT an automaker/oil company plot “to keep the car king” and “destroy communities/towns/livability by building highways that make alternatives to the personal automobile unbearable.”*

Even some mass transit users have expressed concerns that the system may have contradictory results.

One is Santa Clara resident and 22 bus regular Paul Pedersen, who noted that BRT could force people to travel further on El Camino by eliminating left turns at some cross streets, force more cars on to residential streets, make it harder for traffic to clear intersections on a single green light, and increase total travel time with longer walks to BRT stops and transfers between rapid and local buses.

It could, says Pedersen, “actually result in longer waits between buses for the 22 line, and the 22 will have to battle the increased density on the two ‘regular’ traffic lanes…that will make public transit less attractive.

To follow this issue, visit Valley Rapid at www.valleyrapid.org or call them at (408) 321-2300. There are also links to information about the project at santaclaraca.gov/index.aspx?page=50. For information about the Grand Boulevard Initiative, visit www.grandboulevard.net, call (650) 508-6369 or email goodrichc@samtrans.com.

*The same commentator at systemicfailure.wordpress.com also proposed installing “cycletracks along the entire length of El Camino Real,” which could be done, he said, “in a matter of days.” This prompted one wit to ask if he proposed using “the same alien technology and slave labor used…to build the pyramids.”