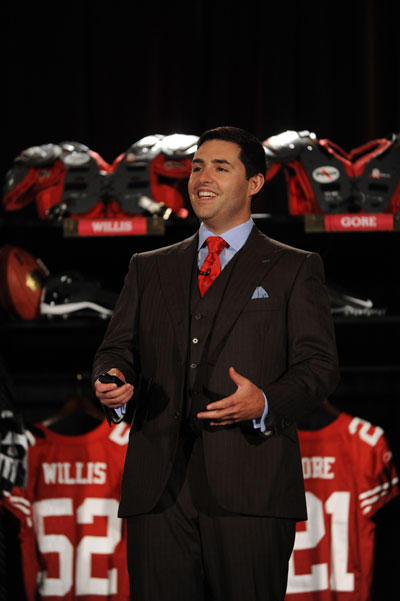 Thomas Edison famously said that genius is five percent inspiration and 95 percent perspiration. So too, the new Santa Clara stadium beginning life this week. Its history could be said to begin with a 2001 Mercury News headline: “49ers’ Contract With 3Com [Candlestick] Park Up For Renewal.”

But what made the San Francisco 49ers look south to Santa Clara in the first place? Certainly one factor was the team’s training camp and headquarters in Santa Clara.

Another was an letter from first-term Santa Clara City Council Member Kevin Moore asking 49ers owner John York to consider what Santa Clara had to offer, according to several sources. “He put his ideas on paper and showed up regularly in our lobby and talked to everyone he could,” recalls former 49ers VP of Corporate Communications Lisa Lang, who was instrumental in the early discussions. “He did not give up on it.”

In retrospect, 2007 looks like the stadium tipping point. Mercury sports writer Mark Purdy posed the question: “So how does this notion of playing a Super Bowl across the street from the Psycho Mouse roller coaster strike you?”

Mayor Patricia Mahan took that ball and ran with it, telling Purdy, “We are ready for a Super Bowl. We have easy freeway access, wide surface streets, light rail and Caltrain access, large parking lots. I’m sure it will accommodate all the tailgating anyone wants to do.” On November 12, Mahan was not only celebrating a re-election victory, she also got the news that Santa Clara wasn’t just the 49ers’ plan B anymore. Santa Clara was the team’s top choice.

When some San Francisco politicians tried to block the team from taking the name “San Francisco 49ers” south, the Chronicle’s Scott Ostler joked, “However, there’s no assurance they won’t call themselves the San Francisco Santa Clarans.”

Mayor Mahan, a lifelong 49ers fan who first saw the 49ers play in San Francisco’s Kezar stadium, worked to cool talk of inter-city rivalry, even while promoting Santa Clara to the NFL.

Lang shares that view. Going public with the information that the 49ers were considering Santa Clara for a new stadium “started a media frenzy that I call a ‘Tale of Two Cities,'” Lang says. “It really wasn’t about that. It came down to the best experience for the fans.

“The infrastructure for ease of access is equally important for fans,” she explains. “People want a total fan experience that’s positive, that starts when you leave home and ends when you return. You don’t want to be sitting in traffic for two hours in between.” 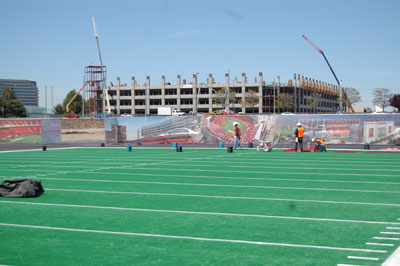 The stadium effort ramped up into high gear in the next months, with the Mercury’s Julie Patel reporting “City Council To Get Guidelines For A South Bay Proposal,” noting that the “guidelines include barring the team from using taxes on residents or businesses and requiring the team’s owners to be directly involved in talks.

“Mayor Mahan said she wants assurance that 49ers officials are ‘strictly looking at a privately funded stadium,'” Patel continued. “She also wants to ensure there are enough public hearings outlined in the process and that any concerns – such as noise and traffic – are adequately addressed.”

By mid-year, a critical project requirement was in place. “The San Francisco 49ers say they are willing to assume the financial risk of operating a stadium in Santa Clara, vowing that the team would be legally bound to cover stadium operating deficits,” reported the Mercury. The 49ers had previously agreed to cover construction cost overruns.

“If I were the city of Santa Clara, what I would be concerned about is if something bad happens that is not projected, who pays?”49ers chief financial officer Larry MacNeil told the Mercury. “The 49ers’ would be the answer in Santa Clara.”

In 2007 stadium opposition also coalesced. “The escalating battle over a new 49ers stadium landed at Santa Clara’s public library Monday, with critics blasting the proposal as a colossal waste of money and supporters challenging their opponents’ math,” wrote the Mercury’s Julie Patel in October. Stadium opponents demanded a ballot referendum on any stadium deal.

Meanwhile, the 49ers feasibility study showed the proposed stadium bringing about $100 million into the local economy, and Santa Clara officials put on their green eyeshades to pencil out the costs of hosting the team.

“Without the committee’s guidance, insight and leadership we wouldn’t have been successful,” says Ed McGovern, the political strategist for the campaign. “There are nuances in each community that only people who are active in the community can know.”

One of McGovern’s decisions, on the advice of Pat Mahan and Lisa Gillmor, was to have the York family reach out personally to Santa Clarans in a series of coffee chats and house parties.

As the year closed, plenty of work still lay ahead. In January 2008 the City Council gave the go-ahead for official negotiations with the 49ers. It would be a year before a state law change allowed the choice of a stadium builder on criteria besides the lowest bid, and two years before the stadium referendum – Measure J – appeared on the ballot and garnered 58 percent approval.

It would be three years before a legal dispute with Great America owner Cedar Fair was put to bed, and Larry MacNiel brought together a financing package that enabled what voters approved in Measure J to take shape.

And it would be nearly four years before parking agreements were inked, a petition for a second referendum tossed out of court, and shovels actually hit the ground.

“There was very strong leadership in Santa Clara,” says Lang. “We saw a city that was very well-run – only two city managers in 45 years – a city that was fiscally responsible and delivered for its citizens. They had the can-do spirit.”

No history of how Santa Clara got to April 19, 2012 would be complete without noting that the city’s 1970s general plan aimed to “put increased emphasis on the social, economic and physical environment of the city as opposed to simply seeking more intensive land use,” according to the 1973 environmental impact study for the Frontier Worlds theme park, which would eventually materialize in 1976 as Great America.

“With respect to specialized recreation facilities,” the report said, “the city’s major need is a significant sports stadium. None of the local high school fields are adequate as a citywide facility. Frontier Worlds could signal the beginning of an alternative policy to former policies which emphasize growth as a goal.”

Indeed, the city has tried for a stadium on city land before; notably in 1989 with the San Francisco Giants, again in 1998 with the Oakland As, and yet again with an Earthquakes soccer stadium plan in 2004.

None succeeded in their stated objectives. But all provided necessary exhibition season training for the effort that comes to fruition this week. “The Giants project gave us insight into what had to be done to get a stadium,” says former City Manager Don Von Raesfeld.