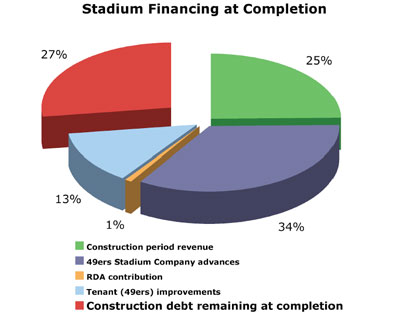 Now the Santa Clara stadium construction financing is in place, what’s the long term plan for paying off that debt? The short answer is that any loans outstanding when the construction is finished will be refinanced into long-term debt.

Refinancing – “takeout financing” – can take the form of bonds or loans, according to Gregory Carey of Goldman Sachs, which put together the construction financing deal. The differences between bond financing and bank loan financing depends on several factors:

But how much will the Stadium Authority’s final debt be? Here are the current city projections (in millions):

Another comparison to note is that Santa Clara’s city-owned electric utility is currently carrying $216.5 million in long-term debt that is secured by the city’s electric revenues, according to financial statements at www.siliconvalleypower.com.

The utility also has “contingent” liability for about $1 billion (about half) of the outstanding debt of the four power generation agencies it belongs to – Northern California Power Agency (NCPA), Transmission Agency of Northern California (TANC), M-S-R Public Power Agency (MSR PPA), and M-S-R Energy Authority (MSR EA). In other words, if one of these agencies defaulted, Santa Clara could be liable to pay part of its debts.