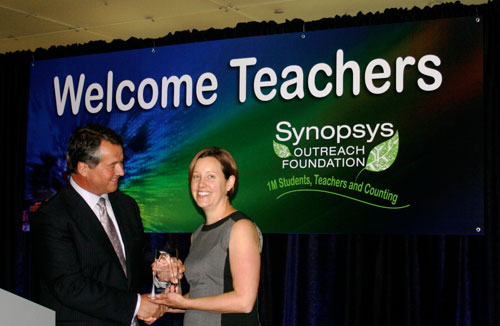 “I love seeing kids realize something for the first time—the lightbulb moments when they figure it out for themselves, the excitement they get with discovery,” says Buchser Middle School sixth grade earth sciences teacher Amy Brindos-Reeber.

Reeber was one of three science teachers in Santa Clara County to receive an award from the Synopsys Silicon Valley Science & Technology Outreach Foundation at a ceremony September 24 at the Computer History Museum in Mountain View. The milestone ceremony celebrated the non-profit foundation’s outreach to more than one million California students and teachers since its founding in 1999.

Reeber, who has taught at Buchser for twelve years and teaches five earth sciences classes daily, received the foundation award for her commitment to science education and to the success of her students at science fairs, which are sponsored by the foundation in all 58 counties of California. Earlier in 2012, fifteen students from her classes advanced from the local to the district level, and one 11-year-old received honorable mention for her science project at the state level.

“We watched the [2010] earthquake in Haiti as it happened,” says Reeber. “One of my fifth-period students noticed movement on the seismograph in our classroom.”

“Hey, something big is happening!” the excited student said. Each of Buchser’s two sixth-grade science classrooms has a seismograph.

“We are excited for Amy to receive the recognition she deserves through this award.  Amy is dedicated to her students and their success. She is a vital piece to the science department at Buchser with the leadership she brings to her department,” writes Buchser Middle School Principal Kyle Eaton in an e-mail.

“This reward also shows the strength of Buchser’s science program. Every student throughout the school is completing ‘Honors’ level work, and this award in a way acknowledges that work. First and foremost, congratulations go out to Amy for her excellence,” says Eaton.

Reeber goes the extra mile to encourage her students to learn and enjoy science. She gives up her own prep and personal time to tutor her students. She purchases supplies for students out of her own pocket if it means the difference between a student participating in a science fair or not. She wrote a booklet that breaks down and simplifies the steps to participate in a science fair to facilitate the process for students and their parents.

“I love being at Buchser. It’s the best-kept secret in the city. The teachers are great, and we work hard with our students,” says Reeber.

For information on the Synopsys Outreach Foundation, visit www.outreach-foundation.org.

Schools
Author Erika TownePosted on June 17, 2022June 16, 2022
The education arm of the 49ers continues to educate students about sustainability, this time by teaching them about water sustainability. “We’re always trying to...