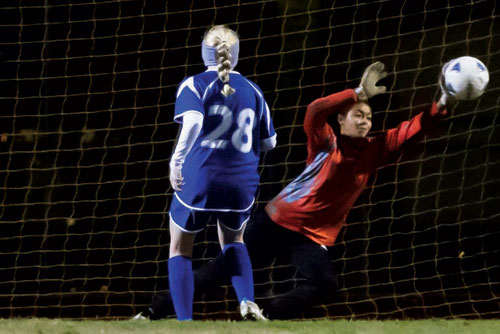 Coming into last Wednesday night’s match, the Wilcox Chargers girls’ soccer team was still looking for its first league victory. They had previously lost to Cupertino and tied with Milpitas High School. A win over the Santa Clara Bruins would give them a huge boost of confidence moving forward throughout the season.

Rain fell, and the night air was cold, as the match began. Wilcox started off strong, seeming to hold possession in Santa Clara’s end effectively. That would not last, though, as the Chargers were unable to put any shots on goal during that span. Before they knew it, Wilcox was backed up in their own end, finding it difficult to keep possession, as Santa Clara was quicker and more physical to every loose ball. This caused Wilcox Coach Javier Rodriguez to dial back an already struggling offense and move to a defensive 5-4-1 formation.

The Bruins defense was phenomenally stout at the point of attack, strongly tackling the Chargers off every ball. Their aggressiveness nearly backfired, however, as Santa Clara’s defense broke down for a moment’s notice, which gave the Chargers two breakaway chances. Bruins goalkeeper, Adriana Charvet (’15), stopped both attempts, leaving the score at 0-0.

Just as things began to look up for Wilcox, Hailey Thompson (’15) made an illegal tackle in the box, setting up a penalty shot for Kelsee Katsanes (’14) of the Bruins. Freshman keeper, Alexandra Valdivia made a monstrous diving save for Wilcox on the penalty shot, however, forcing a corner and preserving the tie. “She gives the team security and confidence,” Rodriguez said of his young and talented keeper. It would all be in vein, though when Santa Clara’s Rachel Comstock (’13) was credited with the first goal of the game after the ball ricocheted off of a Wilcox defender on her cross in. Santa Clara capitalized again after their gained momentum, as Hanaha Pereira (’15) was able to find the back of the net at the end of the half, putting the Bruins up 2-0.

As the final 40 minutes began, Wilcox again struggled to keep the ball in Santa Clara’s half of the field. “Our offense is not very explosive but we do have fast players that can put the ball on the back of the net,” Rodriguez said of their offensive struggles. “Unfortunately, there are games like this one in which things don’t go as we planned.” After most of the half passed without much action, Santa Clara extended their lead with a goal from Shaelan Murison (’16). Wilcox would not be shut out at home, though, as captain Crystal Mendes (’14) beat Charvet in a foot race to put the ball in the back of the cage. That was all Wilcox could muster, however, dropping to 0-2-1 in league games on the season as Santa Clara beat the Chargers 3-1.

The Chargers next match is January 16th at Fremont High School at 3:30 p.m.

Bruins One Man Show Not Enough Against Powerful Pioneers