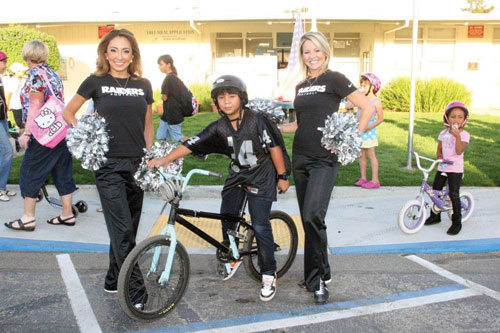 On October 3, Braly Elementary School in Sunnyvale kicked off International Walk and Bike to School Week 2012 in conjunction with Santa Clara County’s Safe Routes to School Program. The event included Sunnyvale Mayor Anthony Spitaleri, members of the Oakland Raiderettes and Sharkie, the mascot for the San Jose Sharks.

The goal of Walk and Bike to School Week is to raise awareness about the need to create safer walking and biking routes for Santa Clara County and to emphasize the importance of increasing physical activity among children. “Encouraging kids to get out and walk or bike to school goes a long way in increasing physical activity and reducing overweight and obesity among children,” said Santa Clara County Health Officer Dr. Marty Fenstersheib in a statement. “In addition, events like these teach children how to be safe when they’re riding bikes and walking. This will ultimately help create safer environments where everyone in our community will feel good about being outside, walking and bicycling.”

A resolution was passed by SCUSD in August to approve the Safe Routes to School Program. The goal of SRTS is to increase the number of children who walk or bike to school and remove barriers that may prevent them from leading active lifestyles. The resolution, sent by SCUSD Superintendent Bobbie Plough states that the benefits of the program include a “reduction in traffic congestion around schools and [a] decrease in vehicle emissions that cause pollution, [an] increase in physical activity through walking and bicycling to support student health and curb childhood obesity, [the] enhancement of academic performance through improved mood, concentration, creativity and problem-solving abilities, [an] improvement of parent and community involvement, [and the] creation of safe passages for bicycling and walking to school.”