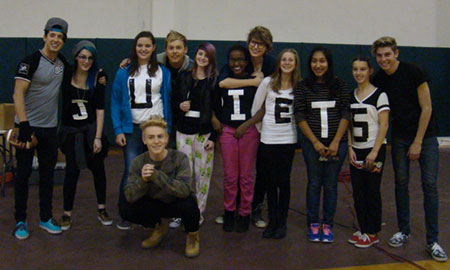 On the afternoon of December 6, students at Cabrillo Middle School were in for a treat as they gathered at the Youth Activity Center next to their school. Excited screams and shouts from adoring fans ensued when members of After Romeo, a pop boy band, appeared and performed their upbeat music and hip dance moves. The intent to spread an anti-bullying message distinguishes this band, part of the Bully Proof Tour, from other musical acts.

“It was a chance to generate some discussion about the anti-bullying issue with celebrities who have experienced things that students can identify with,” says Marc Auger, the vice principal of Cabrillo Middle School, also known as Mr. O.J. to his students for the pronunciation of his last name. A sixth grade girl, Victoria Johnson, made the suggestion to invite the band to perform at Cabrillo. “I learned that After Romeo was on a national tour, and their stop on December 7 was at Santana Row,” Auger explains. “They were available the week before for three promotional concerts at middle schools. They have a really positive anti-bullying platform and they present the message well to the middle schoolers.”

At the concert, band members shared that they were familiar with the experiences of being bullied. They grew up wanting to be entertainers, and they liked to sing and dance. Their interests and aspirations had sometimes drawn bullies.

Band members also invited a Cabrillo student onstage where she shared an experience about being bullied. All the band members gathered around the girl and gave her their support. After the concert, band members distributed cards and signed autographs for hundreds of fans, mostly female students eager to meet their boy band idols. Some girls came in shirts each displaying a letter, so when the group stood together, the letters spelled JULIET.

“Whenever there’s a large group of young people, for example, adolescents, there are always going to be some issues involving bullying,” Auger says. “At Cabrillo, we have a culture climate committee made up of teachers and myself. We create special lessons in character development, and we’re always looking for opportunities to spread a positive message about kids getting along with each other with hopes of stamping out bullying. Mr. Bruce Halen, a committee member, makes the daily announcements. They are heard over the loud speaker during homeroom. Our messages include topics like anti-bullying and tolerance. We promote ideals like respect, responsibility, and integrity. We do this to create a school climate to get people thinking a certain way, a positive way.”