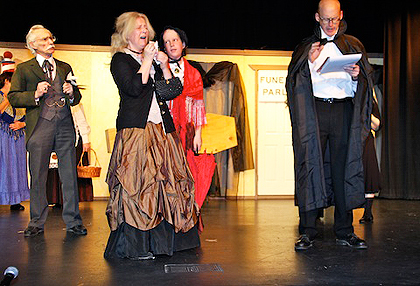 Proving there’s nothing like vaudeville for escaping a grim economy, this weekend’s annual Santa Clara Showtime offered plenty of entertainment for about half the price of a first-run movie ticket. Audiences enjoyed a live bill of original melodrama, the comedic talents of Mad Hatter duo Lou Bamberger and Bill Cannon, and an operatic close from Mission City Opera Music Director Michael Taylor.

The show raised over $10,000 for senior health and wellness programs, according to Julie Clark of the Santa Clara Women’s League, the dedicated volunteer group sponsoring Showtime.

“Hard economic times have reduced the earnings of Showtime compared to last year,” says Clark. “But this will not reduce our commitment to the Health and Wellness Program at the Santa Clara Senior Center.  The Santa Clara Women’s League thanks the entire community for their continued support of this important program for our seniors.”

But these malevolent malefactors are no match for Doomstown lawmen, Sheriff Sam (Rick Mauck) and Deputy Pete (Peter Sparaco), ably assisted by green power in the guise of garlic gardeners, Patina (Arlene Rose) and Gina Greenjeans (Linda Sutton). These Doomstown’s civic-minded citizens run the villains out of town and all’s well – at least until next year’s production of regularly scheduled peril.

Justice served and civic order restored, the Showtime program continues with old-style variety acts: live singing, dancing and comedy sketches called “olios,” ably managed by Rosemary Huza, who for years has been a wizard behind the Showtime scenes.

Madcap Mad Hatters Lou Bamberger and Bill Cannon received enthusiastic responses from audiences for their inspired pantomimes of Spike Jones’ “You Always Hurt the One You Love” and “Glowworm.” Virtuosos of slapstick a la Harpo Marx and Red Skelton, the pair has honed their performances since first teaming up in high school, over 50 years ago.

Longtime Bay Area favorite, baritone Michael Taylor, provided a dazzling close, wowing audiences with a bravura performance of one of opera’s most famous baritone arias, the Toreador Song from Carmen.

Among the familiar faces of the Showtime performers and volunteers, one dearly loved in Santa Clara was missing: Showtime’s founder, Cleo Stuckrath, whose health prevented her from attending the show. The longtime community activist and journalis created Showtime to replace funding for senior services cut as a result of Proposition 13.

Interested in joining Showtime? No experience needed – just interest and a sense of humor. Call (408) 615-3170 for information.

Teen Center: A Hip Place To Be

Keeping the Spirit of '45 Alive through Personal Stories