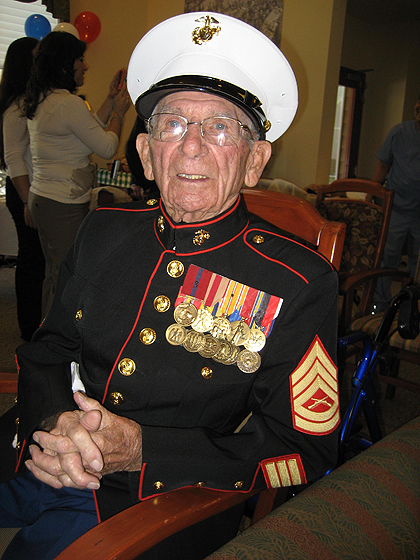 Where were you on August 14, 1945, the day President Harry S. Truman announced the end of WWII over the radio? What do you remember? What were your feelings? These are questions members of the greatest generation are being asked to answer as part of the nationwide “Keep the Spirit of ’45 Alive” initiative.

Lillian Langham Swink was in London at her family’s home on Great Cambridge Road on August 14, 1945. She was a British war bride, and her American husband of three weeks, a sergeant in the U.S. Air Force, had just stopped off to kiss her goodbye before leaving England on a new assignment.

“I was in Hawaii when the war ended,” says H.E. “Skip” Adams, a gunnery sergeant in the U.S. Marine Corps during WWII. “We were happy that the war was over, but we thought about all our buddies who had been knocked off and how they couldn’t see this victory, and it kind of hit me. That was the saddest thing.”

Adams is a survivor of the D-Day landing of the 5th Marine Division on Red Beach, Iwo Jima, February 19, 1945. The battle to capture the island from the Japanese lasted until March 26 and resulted in some of the fiercest fighting in the WWII Pacific Campaign.

Adams’ memories of that battle are still vivid. “I was in the 6th wave to land, so we took less fire,” he says, accounting for his survival. “Every battle is the same. You’re getting shot and any time, any shot, could be yours. It doesn’t matter which island you’re on.”

The 84-year-old Adams, a San Jose native, looked distinguished in a dress uniform that served him well his 16 years as a Marine. Like Swink, Adams was taking part in a Keep the Spirit of ’45 Alive open house March 12, hosted by Pacific Gardens Assisted Living & Memory Care Community, 2384 Pacific Drive, Santa Clara.

Volunteers Laura Jimenez, Diana Nguyen and Cuong Le were ready with laptop computers and photo scanners to record the personal stories of WWII generation civilians and veterans such as Swink and Adams. The stories will be entered in a national online archive for the nation to read, which can be accessed at www.spiritof45.org/sv.

“This project is to bring together seniors and my generation—the net generation,” says Le, who began volunteering while in high school. “Working with these people, I learn a lot about history and how communities can come together. If we work together like they did in ’45, we can get over obstacles.”

The mission of the nonprofit Keep the Spirit of ’45 Alive effort, is “to preserve the legacy of the men and women of the greatest generation so that their example of courage, self-sacrifice, ‘can-do’ attitude and commitment to community can help inspire a renewal of national unity in America at a time when our country once again must come together to meet historic challenges.”

Founding president Warren Hegg says Keep the Spirit of ’45 Alive is the outgrowth of the Digital Clubhouse Network (www.digiclub.org), a 1996 NASA research project to develop innovative ways of using technology to build community.

Keep the Spirit of ’45 Alive pairs youth volunteers with senior story tellers. The story telling has spread nationwide to some 500 cities. The Silicon Valley founding chapter is based at History San Jose in Kelley Park.

The second Sunday in August was made a national day of remembrance, the National Spirit of ’45 Day, by Congress in 2010. Special events in remembrance of this day will take place August 13 and 14 this year at History San Jose (www.historysanjose.org).

Biters Get Bitten in Showtime 2011