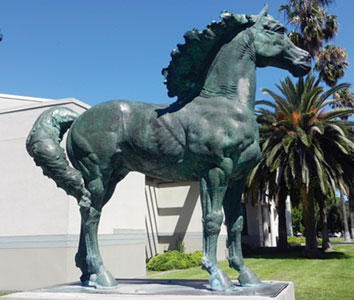 Santa Clara’s Triton Museum of Art was named after a horse.

Many may have initially thought the museum was named after the Greek god of the sea, but that is a misconception. The story behind the museum’s moniker is rooted in the subject of one of Santa Clara’s pieces of public art – one that proudly stands in front of the Triton Museum at the corner of Warburton and Don Avenues.

“The bronze [Morgan Horse] statue was commissioned by the horse’s owner, Robert Morgan, who started the museum because of his interest in art,” reads an Oct. 3, 1986 article in the Santa Clara American on the construction of the current Triton Museum building. “Triton, the horse, was Morgan’s favorite steed. It is also where the museum draws its name from.”

Created by New York-born Alexandrovich “Sascha” Stanislav Schnittmann in 1966, the 1,000-pound, life-sized, $80,000 bronze horse was dedicated to San Jose’s Triton Museum of Art on Oct. 30, 1966. The Triton moved to Santa Clara after “Urban Renewal” condemned the museum’s building, and Santa Clara offered to build a new one according to a Mar. 15, 1972 article in the Santa Clara Valley Journal on the upcoming Mar. 17 “Robert Morgan Day” celebration. 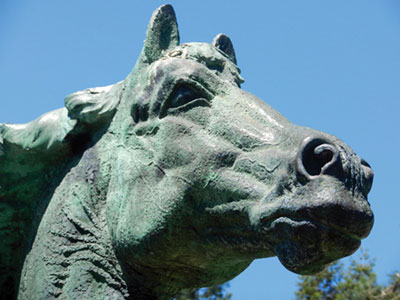 In March of 1985, students at Blackford High School damaged the Morgan Horse while trying to complete a senior prank. “In the process of trying to remove the statue from the museum grounds on Warburton Avenue across the street from City Hall, the youths accidentally cracked the horse’s tail and fractured a couple of legs and hoofs,” reads a San Jose Mercury News article on the attempted theft. “The damage occurred after they had sheared off some bolts securing the horse’s hoofs and toppled it off its 4-foot-high pedestal.” The horse was repaired at the Fine Arts in Metal art foundry in San Jose and was back on display in the summer of the same year.

A Santa Clara American article dated March 22, 1978 announced the death of Schnittman, at age 64, from a heart attack. Morgan is quoted as saying, “He was really a remarkable man. A great artist, with great skill. Schnittman [sic] had a lot of vision and a lot of energy and his contribution to the Triton Museum was a major factor in the current high interest in art in Santa Clara County.” Schnittmann is buried at Mission City Memorial Park in Santa Clara.

Likewise, a Mercury News article dated October 19, 1999 says that Morgan, a lawyer and horse breeder, died from complications after suffering a stroke. He was 75.

College Dances Across the Ocean