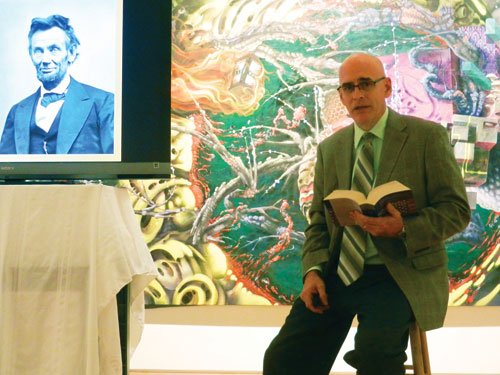 If Harper Lee’s “To Kill a Mockingbird,” is about the person reading it and Dante’s “Divine Comedy” is reflective of the reader, then it’s safe to say that Whitman’s verse is also a validation of the self. However, one must read his words and decipher his metaphors to find out how it teaches readers to be better people. And, while it’s true that “O Captain, My Captain” is about the death of Abraham Lincoln, there’s more to it.

“Lincoln represents every man and every woman,” said Metcalf. “So the deeper metaphor is to become one with death and to stand up after that. And, by you standing up you become – after joining with the dead – you become the resurrected. You are the proxy resurrection. You take on this dead, fallen person’s soul, his ideas, his thoughts, his beliefs, his values and you stand up and you walk back to that crowd and you carry on that deceased person’s mission in life.”

Whitman often said, through metaphor, that everyone is connected. With each reading, those connections become clearer. But, Whitman didn’t just change the way poetry was written, he changed the way art was created. He explored his inner self – something that hadn’t yet been done in American writing – and the art world took notice. Things started to change. Art also became a metaphor and landscapes weren’t just paintings of what the artists saw – they were a window into humanity.

“This is us,” said Metcalf. “That’s the great message of Walt Whitman. That’s the message of art that comes out after the Civil War. This leads to all the great movements of the 19th and 20th century. The work we looked at on the first of these lectures – To Kill a Mockingbird and the art of the Civil Rights Era. That happened because of Walt Whitman, and later Mark Twain, and artists like Fredrick Church…[Whitman] heavily influenced the realism movement in America…The idea of portraying the every man becomes important in American art.”

“These great artists are telling us how to be a human being,” said Metcalf. “If you want to know what art does – why is it worthwhile – it teaches us how to be human. It teaches us the truth of the universe…Open yourself to it. Experience it. Listen massively and absorb it. You won’t get it the first time. If you do, it’s not that good. Understand the message. And, I will tell you where you’re going. You’re going to a wonderful realization that you and I and Whitman and Lincoln…are all one. This is the message of great art and I’m going to keep saying it week after week after week.”

The Triton Museum’s lecture series on art and literature continues Thursday, Oct. 24 with “Wolfram von Eschenbach’s ‘Parzival’ and Art in the Age of Chivalry.” Lectures begin at 7 p.m. Drop in fee is $20. Visit http://tritonmuseum.org/education_adults_arthistory.php for more information.