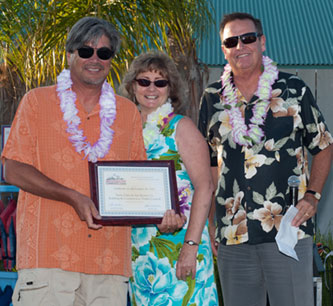 Santa Clara’s Mission City Community Fund welcomed about 200 people last week at California’s Great America park for an evening of island ho`okipa (hospitality) at a luau recognizing the outstanding work of the organizations that the MCCF supports.

The MCCF’s second recognition luau featured traditional Hawaiian dance from Pride of the Pacific islands, as well as the second annual Ugliest Hawaiian Shirt contest, won this year by Arlene Rose – proving that when it comes to recognizing outstanding achievement, MCCF is truly equal-opportunity. San Francisco 49ers alumnus Eric Wright was a guest speaker at the event.

Chaired by Santa Clara City Council Member Debi Davis – her fans call her “Dynamo Debi” – the event raised money for the non-profit’s extensive community grants program. “We’re thrilled at the great response from the community,” says Davis. “And I want them to know that it was outstanding work from our team and the folks at Great America that made the event such a success. We couldn’t have done it without them.”

Over nearly three decades, MCCF has given away more than $1 million to a roster of community and service organizations that include human services agencies such as Bill Wilson Center, the YWCA, and the Health Trust; arts groups like the Triton Museum and Santa Clara Ballet; and education and environmental initiatives including the Wildlife Center of Silicon Valley, Montague School Science Camp, and the Library Foundation’s Read Santa Clara program.

Community
Author Melissa McKenziePosted on March 5, 2014
With numbers increasing year-by-year, the interest in the annual Soroptimist Old Bag Luncheon continues to grow. And, with the recent increase in membership since...
SPONSORED