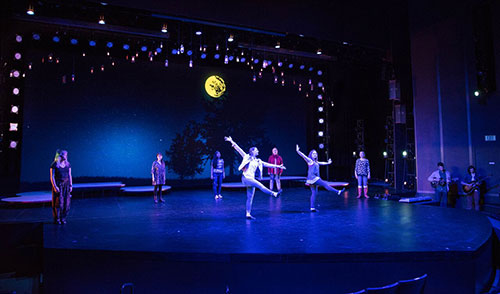 On Friday, March 10, the community filled SCU’s Louis B. Mayer Theatre to gain some insight about our local Jesuit university from the opening night of the new play, Welcome to Claradise. The docu-play, written by Professor Brian Thostenson and based off of extensive interviews with SCU’s students, faculty and staff reveal layers of depth on campus that break down the stereotype of the school as a so-called academic “paradise.”

The production, inspired by Anna Deavere Smith’s documentary theatre work, delved into many historic and recent events on campus. As director Aldo Billingslea and playwright Thorstenson noted in the playbook, “We have tried to not overlook our shortcomings, or only fixate on what’s wrong, but instead to see the challenges and work to keep our mission active and alive.” The cast began by openly acknowledging the difficulties of playing all the roles–especially since they were an all-white group.

The student actors then movingly told stories of some of the first female students’ struggles to graduate from SCU as well as the protests leading up to the creation of the women’s studies and ethnic studies programs on campus. Additionally, the 10 member cast shared monologues tackling current issues such as a growing rape culture in universities nationwide and bias incidents (particularly against the LGBTQ community). The play also probed into the 2016 events on campus–the damage inflicted onto an outdoor display commemorating 43 missing Mexican students and the October “acts of discrimination” when two students drew swastikas in blood on the walls of a dorm’s elevator.

All of these stories, but especially that of the “acts of discrimination,” were told from a range of perspectives–projected images of the university’s map behind the actors helped show that people from all buildings and all communities on campus were affected. Reactions included those of the current university administration, staff members of the Office of Student Life, editors of The Santa Clara newspaper and Jewish students on campus. Each of these stories helped reveal the complexities of life in Claradise. The director and playwright also hoped sharing these stories conveyed that the fact that “we know that collectively we can improve our world, our community, our campus and our home.”

Of course, there’s a reason why many students like to refer to the campus as “Claradise” and there were moments of levity, joy and hope in the play as well. The enjoyable musical interludes, written by student Riley McShane (a final piece, the “Mason Jar Choir” was written by Michael Sturgeon) and choreographed by Professor David Popalisky offered a fresh perspective on campus, especially through the thoughtful “Midwestern Moon” song. A quick detour into the “surface flaws” on a phone drew laughs from the audience as well.

During the evening’s talkback session, the student actors and show staff offered insight into the production as well as the time, energy, and thought they infused into each scene. This production began as a class in Fall 2016 and most of the student actors helped conduct the detailed and often emotional interviews. While many of the interviews didn’t necessarily make it onto the stage, actor Maddie Tuck explained that they helped offer “another brushstroke of this campus” as they filled in the production.