The South Bay Blue Star Moms is a military support group based in Silicon Valley dedicated to supporting the troops and assisting families that have family members serving in the United States Military. On Dec. 7, volunteers will come together to build over 600 boxes, then label them for shipment through the U.S. Postal Service.

“I created this event to bring awareness to the South Bay Blue Star Moms,” said event Bay Area Entertainer and Magician Phil Ackerly, who is also the event’s Host and Emcee. “I have raised over $10,000 in the past four years and this year will be another sold out show.

“My wife and I have a son in the Air Force,” continued Ackerly.” So, I know how much it means to our military men and women to receive a box of essentials and a few ‘goodies’ from home while they are deployed overseas.”

Ackerly will be joined on stage by Comic Magician Bruce Gold and Comedian Milt Abel.

Doors open at 7:15 p.m. and the show begins at 8 p.m. at Rooster T. Feathers Comedy Club — located at 157 W. El Camino Real, Sunnyvale. Tickets at $25 advance and $35 at the door. Attendees must be 21 years with a 2-item minimum purchase per person. Visit www.roosterTfeathers.com to purchase advanced tickets. 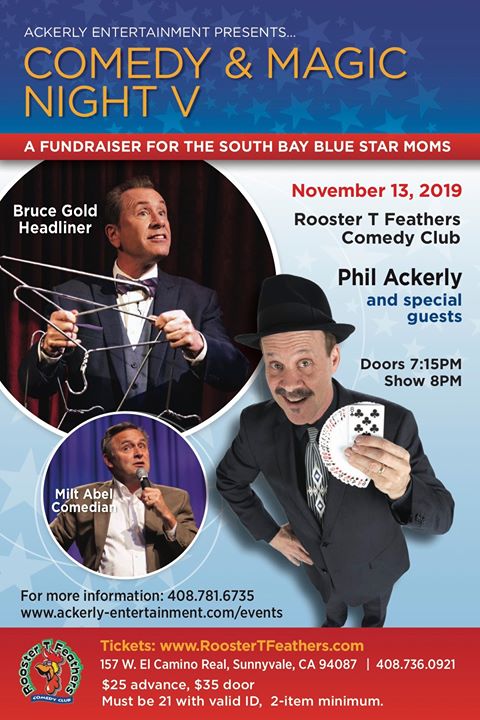 More About The Performers:

Phil’s early career followed a technology path in Silicon Valley. After graduating with a degree in Electronics, he worked in various manufacturing and engineering positions in the” high-tech” industry, but along the way, Phil was drawn to the world of magic and entertainment. So, during his non-working hours, Phil performed magic at birthday parties and company events and was hired as the weekend magician and demonstrator at the House of Humor in Los Altos. Over time, Phil’s creativity and showmanship landed him first place awards from leading magic organizations. After a round of layoffs at a company where he had worked for eight years in product marketing, he found the perfect opportunity to turn his passion into a second career — magician and entertainer. Today, Phil’s busy schedule has him performing over 350 shows every year — from corporate events to private parties. His act has taken him to shows in Las Vegas, Atlantic City, on radio and television, Hollywood’s Magic Castle and off-broadway in New York City.

A favorite at Hollywood’s Magic Castle, Bruce has been seen on TV’s Masters of Illusion, Penn & Teller’s Fool Us and he played the magician in an award winning “got milk?” television commercial. Bruce got his start as a kid magician and studied theater in college before switch to stand-up comedy for a decade and eventually brought the two together. He’s one of the few performers who works separately as a stand-up comic and as a comedy magician and he toured comedy clubs for a decade before heading to Hollywood to study screenwriting and pursue an acting career. Bruce also works as a creative consultant and a performance coach for speakers and performers, and he’s the host of his own TV talk show, The Bruce Gold Show, streaming and on cable TV, with 14 episodes aired and 8 more being edited. www.brucegold.com

Milt’s style of stand-up comedy is clean, clever, and funny. With over twenty-five years of experience Milt’s humor has always been devoid of stereotypes, cheap shots, or laughter at anyone’s expense; in other words, never divisive or derisive. With material focusing on everyday experiences about his wife and kids, travels, and how we relate to the world around us; audiences always come away feeling good about how they chose to laugh. Milt also has the ability to make every show unique, enjoying the challenge of personalizing each show with jokes for that performance’s audience. www.miltabel.com