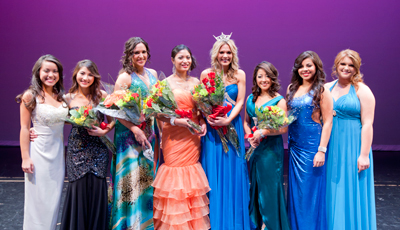 On the evening of Jan.7th, an enthusiastic audience gathered to see eight accomplished ladies of Santa Clara perform in the annual Miss Santa Clara Scholarship Competition held at the Mission City Center for Performing Arts. Stephanie Quintal, executive director of the Miss Santa Clara Auxiliary, thanked the city for its support and mentioned that each participant in the competition receives a form of scholarship.

The winner of this year’s Miss Santa Clara competition is Caitlin Hoemmelmeyer. She also won awards for her interview, evening wear, and community service. Currently a pre-K teacher, Hoemmelmeyer’s scholarship would be useful in helping her pursue her teaching credentials and her studies in Child Development at San Jose State University.

“There were a lot of really amazing girls tonight,” says Hoemmelmeyer in an ocean blue evening dress with a sparkling jeweled strap. “I competed in Miss Santa Clara six times. I kept coming back every year and I finally got my turn! I’ve learned about confidence and so many things about myself through this program that made me the woman I am today. I also want to thank my family, my friends, and my boyfriend.”

For the talent segment, Hoemmelmeyer performed an energetic hip-shaking Tahitian dance in a feathered ensemble with a matching headdress.

“I have family in Hawaii who inspired me to learn Tahitian dance,” she says.

Hoemmelmeyer’s platform is breast cancer awareness. Last year, she raised $3,500 to support this cause.

“This year, my goal is to raise $10,000 [for breast cancer awareness],” Hoemmelmeyer says. “I’d also like to raise money to bring back the fireworks to Santa Clara for Fourth of July.”

“I’m happy I’ve won all these awards,” Calingo says in her apricot evening gown with a ruffle train. “The talent segment was my favorite part of the competition. I self-choreographed [my ballet performance] to Bach’s Prelude to a Cello Suite.”

During the on-stage question segment, Calingo was asked which current Miss California or Miss America was her favorite. Calingo responded that she admired Noelle Freeman, Miss California 2011, for being inspirational, genuine, and approachable.

The contestants demonstrated their stage presence during the talent segment. Renee Torres touched on the deep emotions of Adele’s “Someone Like You” in a passionate lyrical dance. Elise Vue, the second-runner up, performed a colorful monologue from Taming of the Shrew.

The ladies shared their wit during the on-stage question segment. When asked to evaluate affiliates of the Miss Santa Clara organization, Steffi Huynh, winner of the Miss Congeniality award, responded that all affiliated organizations are important because of the role models representing them. When asked what three things she would bring with her on an island, Kathy Tran responded that she’d bring a tennis ball, an iPod, and peanut butter.

Community
Author Diane AndrewsPosted on October 22, 2014
A generous dash of politicians may have been the special seasoning in the sauce for the well-attended Santa Clara Sister Cities Association’s 33rd Annual...

Community Public Safety
Author Erika TownePosted on August 8, 2019
With another National Night Out in the books, local police officers say it was a rousing success. “It was awesome,” said Sargent Cuong Phan...
SPONSORED