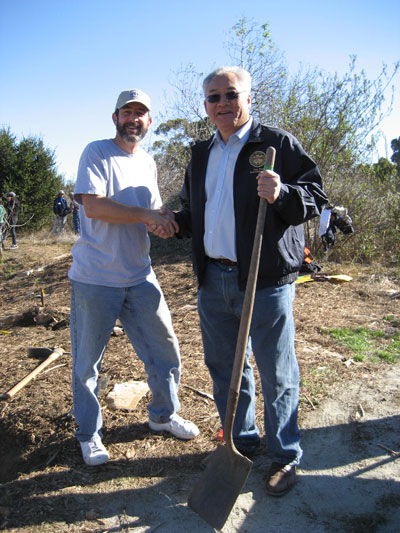 Answering a community call to take up shovels, hoes, pick axes, and pruning shears, about 200 volunteers aged six to 75 turned out at Ulistac Natural Area on Lick Mill Boulevard in Santa Clara January 16, for a morning of service to honor the memory and legacy of Martin Luther King Jr.

For the third year running, California Legislature Assemblymember Paul Fong provided refreshments and invited residents in his 22nd district, which includes Santa Clara, to join him at the 40-acre park.

In addition to doing maintenance such as weeding and pruning, volunteers began digging a 240-foot meandering creek, which ends in a vernal pond. The goal is to retain ground water in the natural flood plain and attract butterflies. Over a ten-year period, a butterfly garden was planted with native plants to attract them. However, because of a lack of water, few butterflies linger.

“This is beyond what I thought we’d get accomplished in two hours,” says Dennis Dowling, one of the chief volunteers with Ulistac Natural Area Restoration and Education Project (UNAREP), which is in the process of organizing as an independent nonprofit organization.

Santa Clara Parks and Recreation Director Jim Teixeira, volunteering on his day off, said that UNAREP just this month received a $106,000 grant from Silicon Valley Water District for habitat restoration, removal of non-native species, and the establishment of riparian habitat such as the creek and pond.

Fran Stewart of San Jose was diligently redistributing piles of dirt dug from the creek-in-progress but paused to recall King’s impact.

“When there’s a leader of a movement, it has a way of bringing people together and feeling that more is possible,” says Stewart, who is Caucasian. “I’ve always felt a commitment to racial equality. I canvassed for the Rumford Fair Housing Act in the 1960s.” The act eventually helped to end racial discrimination in California in renting or selling property.

“Because of Martin Luther King Jr., we get to work together and learn about different nationalities and friends,” says American-born Paul, who is of Mexican ancestry. “When I think of him, I think about how the community working together can do more.”

Ziqi, a Chinese-American from Lynbrook High School, was one of many students doing community service.

“If King hadn’t been here, I wouldn’t have as many opportunities,” she says.

“We watched King’s ‘I Have a Dream’ speech in lit class,” says her classmate Susmitha. “Everyone was his family, and he cared about everyone.”

De Anza College students Leeor Leve and Evyatar Ran were digging the ditch for the creek.

“King is one of the great people from American history. Forty years ago some people thought he was a Communist instigator, and now he’s revered,” says Israeli-born Ran.

Ulistac Natural Area is named after a village of the Native American Ohlone, who once prospered in the Bay Area. Community volunteers continue park restoration throughout the year from 10 a.m. to 2 p.m. on the first Saturday and third Sunday of every month.

City Politics Community
Author Carolyn SchukPosted on August 19, 2015
The town clerk – keeper and protector of the community’s recorded history – is one of the world’s oldest municipal offices. In California that...
Community
Author AdminPosted on February 16, 2011
Long-time Santa Clara community activist Josephine Rowen died peacefully in her sleep on February 5, 2011 following a long illness. She was 85....