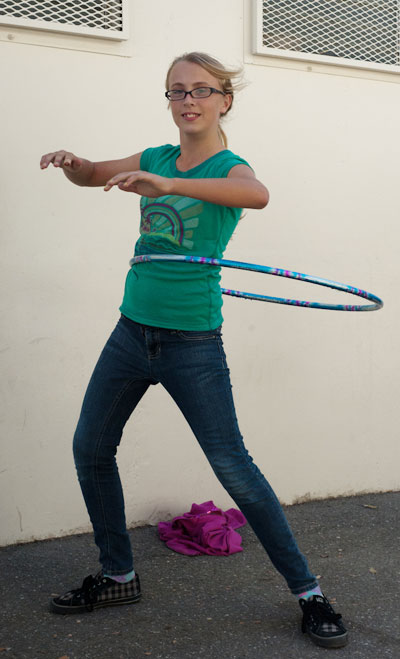 What do millet, quinoa, barley, brown rice, einkorn and sorghum all have in common? The immediate answer is they’re all ancient grains. However, another answer is they all were served at the Peterson Health Fair that was held at Peterson Middle School on Friday, September 30th.

Nine Bay Area organizations participated in the Health Fair, including :the YMCA of Cupertino, Sports Basement, the Santa Clara Public Library, Breathe California, Kaiser Hospital of Santa Clara, the Santa Clara Dental Society, the CA Dietetics Association, the Dairy Council of California, and Full Circle Farm. The YMCA had a demonstration of their Zumba classes designed for students and adults and their Zumbatronic class designed for kids.

Seventh grade life sciences teacher Nancy Fohner said, One of the concerns we’re trying to address is kids’ fitness and health. We hope this Health Fair will help them make an informed decision about what they eat. The event stressed the idea of 5-2-1-0 – 5 servings of fruit or vegetables per day; cut screen-time to 2 hours or less per day; at least 1 hour of exercise everyday and 0 sugary or sweetened drinks. Students had the opportunity to go out to Full Circle Farms and the nature area to measure the amount of sugar in common foods and beverages. It makes a stronger visual impact when you see how much fat and sugar is in a something students might eat.

One mother who asked to remain anonymous said, It was a nice event, but I’m concerned about the messages my children get. One of the posters made by the students included information about how much methane a cow farts. And how if we eat less steak then there will be fewer cows, which will help global warming. I don’t think the schools should be teaching my kids to eat less steak, or to object when we have steak at home. It really sounds more like environmental activism. The 5-2-1-0 program is nice, but we already limit the sodas we have at home – it’s something they have with their dad on the weekend.

Despite that concern, some of the students said they’re already eating healthier. Students in Mrs. Lucia’s 6th grade class, Jenna and Pooja, said they’ve already eaten some of the ancient grains. Jenna added, Before today, I had only tried my mom’s and it wasn’t as good. Pooja added that she had previously tried everything, but millet. I like them all. Her class had cooked the grains, some with vegetables and some without. When asked about Quinoa, she said she’s eaten it with bell pepper, tomatoes and grapes.

According to Vice Principal, Julieanne Topliff, The goal was to provide students with interactive experiences that will help them make healthy decisions by focusing on fitness and nutrition. Based on the reactions and comments by several students and parents, it looks like the focus is working.

Westwood Principal Tapes One for the Team

Briarwood Teacher Honored With Award and $1,000 in School Supplies

Schools
Author Diane AndrewsPosted on December 2, 2015
What’s the number one rule of chess? Sportsmanship. “Look your opponent in the eye and say ‘Good luck,’ and shake hands. At the end,...
SPONSORED