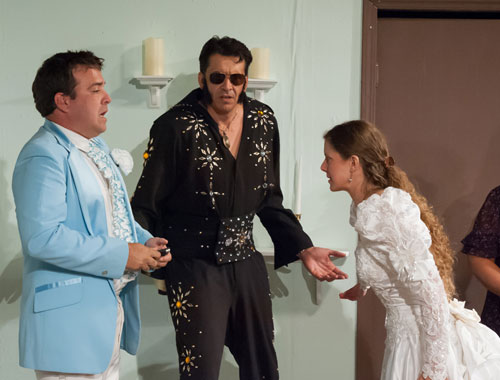 Weddings, as nice as they are, all have the same formula. Person A is in love with Person B and they want to make their love and affection official. They go to a Justice of the Peace, a chapel, or someplace that offers a more unique feel, such as Las Vegas.

So goes the basic plot behind 4 Weddings and an Elvis, the current production by the Santa Clara Players. The show chronicles not just four different weddings taking place at a wedding chapel in Las Vegas, but the intricacies of the lives of the people who enter there with plans to get married, as well as that of the person running the wedding chapel.

First up are Stan and Bev, played by Keith Larson and Ashley Faus. The couple goes to the chapel to seek revenge against their exes who ditched them to be with someone else. But that might not be the complete motive, as Bev tells Sandy, the proprietor of the chapel. Sandy is a bit of an expert on marriage, having witnessed many marriages over the years and also having been married four times and divorced three – all with the same man. As luck, or drunkenness, would have it Bev and Stan get the chance to be married by Elvis, aka John, played by Armando Romero.

Lou, the next person to appear is not seeking a marriage, but a job as a minister. He is played by Steve Corelis, a favorite face of the Santa Clara Players. Lou is an aging minister who has the moves of an older Elvis. Although he appears to be brushed aside, he makes a surprising entrance later in the show. After Lou twists and turns his way out of a job, in walk stars of Hollywood, Vanessa and Bryce, two aging, has-beens who feel the spotlight never left them. Pat Cross and Duncan Heath put in extraordinary performances as the actors the world has forgotten. Fortunately, Lou is on hand to add some of his own glib comments about Vanessa and Bryce, much to the chagrin of Sandy.

The last happy couple to enter the chapel is Marvin Marvel, retired US Postal worker and his bride-to-be, Fiona, who was just recently paroled for good behavior. Their quest for wedded bliss is almost interrupted when the minister, Sandy’s husband, is sleeping one off. Fortunately, Fist, Fiona’s ex has released himself from prison early to see her tie the knot. As luck would have it, Fist, played by Christopher Carter, is an ordained minister who happily, and hastily, performs the ceremony before the police reunite him with his jail cell.

Before the end of the play, Sandy gets into the act by getting divorced again from her husband and then invites her friends to come to her wedding. However, the questions of whom she marries, who performs the ceremony, and what other twists are in store, can only be answered by attending one of the remaining shows.