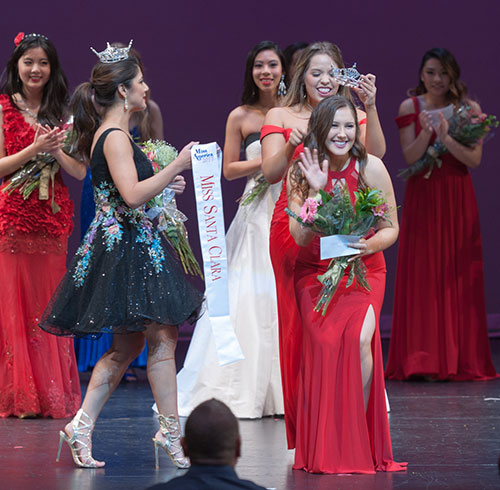 At the 2017 Miss Santa Clara and Miss Santa Clara’s Outstanding Teen’s Competitions on Jan. 8, held at the Mission City Center for Performing Arts, former Miss Silicon Valley Melissa Gialdini rang in the New Year with a solo of the National Anthem. Master of Ceremonies Tony Moises shared the categories contestants were being judged on: private interview with judges, physical fitness, talent, evening wear and on-stage question. Miss California 2016 Jessa Carmack shared that she graduated from San Jose State University debt-free, thanks to $43,600 in scholarships she has received through competing in the Miss America Organization.

The title of Miss Santa Clara 2017 went to Tori Votino, 21, a U.C. Santa Cruz graduate who is now working on law school applications. Votino also won awards for her interview and for being a Facebook Fan Favorite. For the talent segment, Votino performed an eloquent self-written rap called “Book of Me.” In her response to her on-stage question about how to engage young people in politics, Votino said it was important to show young people how the things they do can impact what they care about. Preparing for her first pageant, Votino practiced her interview and public speaking skills at home with her brother.

“My platform is advocacy for underrepresented children and it’s related to CASA which stands for Court Appointed Special Advocates,” says Votino. “I’m going to use my position to speak to more people and look for advocates to get paired with children to help better their lives. These children are foster youth who are not living with their biological parents.”

For the Miss Santa Clara competition’s talent segment, Amy Cui gracefully played a Chopin Waltz on the piano. During the on-stage question segment, Sydney Johnson articulately expressed that President-Elect Donald Trump should think of a proper replacement for Obamacare if he were to work to repeal the Affordable Care Act. For her evening wear, Krystal Nguyen flaunted a white strapless princess seamed gown with a decorative black lining across the chest.

“My platform is Blankets for the Brave, a non-profit organization I started,” Smith says. “I make double layer custom hand-tied blankets for those of all ages suffering from cancer and I make them free of cost. I’m going to continue to promote this through social media and I’d like to partner up with another organization during my year of reign.”

During the Outstanding Teen competition’s talent segment, Ilena Peng smoothly played a Prelude by Rachmaninoff. Melisa Beslagic showed sassy jazz dance moves with air jumps to “Sway.” Natalie DeSousa, also performing jazz movements, demonstrated sophisticated spins while dancing to “Girl in the Mirror.” Glamorous evening wear included Elizabeth To’s burgundy dress with a sparkling bodice, Anne Wilner’s silver strapless dress and Emma Gerson’s black dress with lace detailing. Thoughtfully responding to their on-stage questions, Isabel Wilner said that she would like to tell other teens that doing drugs and alcohol is not safe, Shikha Handa is considering using social media to publicize her platform about empowering breast cancer survivors and Alicia Luong revealed that she had to step out of her comfort zone to motivate herself for the competition.