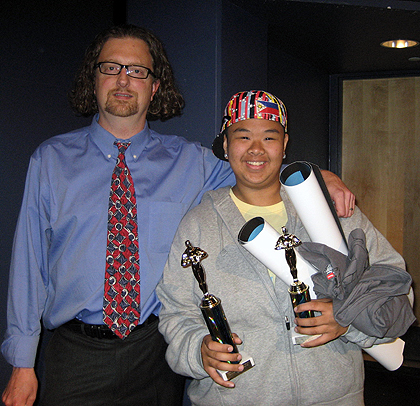 “Don’t worry about your child being a starving artist. Anyone who goes into animation will have a fabulous career and probably support you parents,” says San Jose State University (SJSU) Professor Alice A. Carter, coordinator of the university’s Animation/Illustration Program.

“There are so many opportunities in such an exciting field—more opportunities than qualified people. We’re glad to see so much talent coming up,” says Carter, who was part of a judges’ panel of SJSU animation professors and students at the 2011 FaultLine Animation Festival hosted at the Santa Clara High School Performing Arts Center May 18.

For a second year, Bay Area students competed to win honors and awards for the brief animations they had created in their classes at Capuchino, Carlmont, Leland, Mount Pleasant, Santa Clara, and Saratoga High Schools and Freestyle Academy.

“It’s exciting. We get to see our students’ work compared to students at other schools and be recognized by SJSU professors. It is a huge honor when college professors say what good work our students do,” says Iliad Rodriguez, Leland High School animation teacher. “It’s a huge pat on the back for teachers and students.”

“Animation is a hard, time-consuming process. It takes two weeks of work just to do a 20-second clip,” says Jay Dold, Santa Clara High School (SCHS) art teacher and organizer of the festival, which was co-sponsored by the Partners in Education Program within SJSU’s Animation/ Illustration Department.

Dold points out some of what it takes to succeed as an animator: “You need to be great at drawing, patient to get through the process, be able to work collaboratively, and have creativity—and a weird sense of humor!”

SCHS freshman Alexander was one of about 75 people at the evening viewing of the animation entries. He is taking introduction to art now but is already looking forward to being a junior so he can enroll in Dold’s animation class. “I’ve played online games all my life, so I have a strong interest in being a video game designer,” Alexander says.

The Ligne d’Or—Best in Show—2011 FaultLine Animation Festival winner was Daniel Gonzalez from Mt. Pleasant High School. Gonzalez and his teacher will receive a tour of DreamWorks studios in Redwood City and lunch with a DreamWorks animator, who will review Gonzalez’s work.

“It’s the largest student animation club in the world,” says club president Paul Yula, one of 530 SJSU students majoring in animation. Yula explains that it’s called the Shrunkenheadman Club (www.shrunkenheadman.com) because, though talented, animators have small egos and don’t get big heads.

“The SJSU animation program is one of the top-rated animation programs in the world. Its graduates go on to DreamWorks, Disney, Lucas, and PIXAR,” says Carter. “And they’re having the time of their lives.”

If you’re interested in a career in screen arts, learn about SJSU’s program at http://www.sjsuai.com/ai/. Check http://www.faultlinefestival.org/ for a complete list of 2011 FaultLine Animation Festival categories and winners.