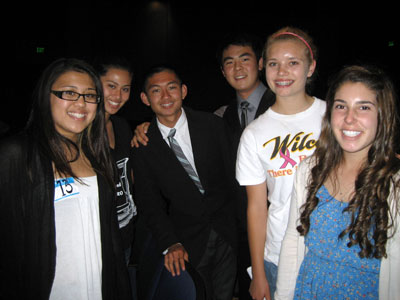 “You’ve Come a Long Way, Baby” was the catchy media slogan to introduce Virginia Slims cigarettes in 1968, and a slogan linked to a rapid increase in smoking among young women through the 1970s.

Today, media messages are a more powerful influence than ever before. Teenagers, on average, consume more than ten hours a day of media—TV, the Internet, movies, magazines, and music. How can they not be influenced by what they see and hear seventy hours a week?

“MissRepresentation,” a documentary by filmmaker Jennifer Siebel Newsom, opens the eyes of viewers to the insidious way mainstream media presents women in violent, demeaning, and sexually offensive roles. A free screening of the 90-minute documentary, which premiered at the 2011 Sundance Film Festival, was held at Santa Clara High School May 11. It was attended by about 125 middle and high school students, parents, and educators and followed by a discussion.

Director Newsom, wife of California Lt. Gov. Gavin Newsom, shows movie, advertising, and news clips portraying women whose value is based on digitally-altered looks, youth, and sexuality. Male and female news anchors are shown describing women who do rise to positions of leadership with sexist adjectives, commenting on their haircuts and wardrobes rather than their achievements.

The media clips are interspersed with commentary by accomplished American women in leadership positions, such as Condoleezza Rice, Nancy Pelosi, Katie Couric, Rachel Maddow, Gloria Steinem, and Geena Davis. They point out that American women still have far to go to attain equal representation and empowerment in business, politics, and society.

For example, women make up 51 percent of the U.S. population, yet only 17 percent are in Congress. Women hold just three percent of top media positions.

“You can’t be what you can’t see,” is the lament of “MissRepresentation.”

“The documentary is accurate and honest about the messages we send to young women and men about sexual stereotyping—things we don’t like to talk about,” says Santa Clara Unified School District Board President Elise De Young.

“It starts a conversation where there was none before,” says Pam Parker, president of the Santa Clara County School Boards Association. The conversation at Santa Clara High School started with audience comments:

“Even when you don’t think stereotyping has an effect on you, it does.”

“It’s so ingrained that we don’t notice it until it’s pulled out and shown to us.”

“The film showed me just how pervasive this is—things you start to accept. It’s a big eye opener.”

“To raise awareness is to make change happen.”

“I’m here to show support from a male perspective, to show that not all males should be stereotyped as human beings who objectify women,” says Wilcox High School sophomore Jooan. “Males can be part of change for women.”

“The gender stereotypes shouldn’t be men against women. It should be everybody working together for equality among men and women,” says Wilcox senior Rachel.

“What I’ve seen the media do to myself and my girls is totally appalling—unrealistic images for girls and not showing strong women in shows,” says Noelani Sallings, one of the concerned parents and educators that presented the documentary.

Santa Clara social activist Teresa O’Neill treated everyone to pizza. View the documentary trailer on www.YouTube.com. Visit www.missrepresentation.org for information, including educational curriculum and how to be a catalyst for change.

On May 31 at 7 p.m., Bluelight Cinemas in Cupertino is presenting a one-time screening of MissRepresentation. Visit www.bluelightcinemas.com for presale tickets at $10. At the door, tickets are $15.