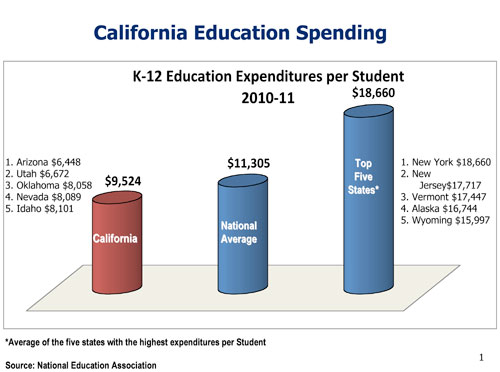 Do the subtraction. If neither of the two tax increases on the November ballot – Propositions 30 and 38 – pass, Santa Clara Unified School District faces $6.5 million in budget cuts, according to SCUSD Assistant Superintendent, Business Services Jim Luyau.

That’s about five percent of the district’s $125 million budget.

As of July, California’s revenues were short by nearly 7 percent, according to the state department of finance. So if neither tax increase passes in November, automatic cuts are triggered by Senate Bill (SB) 1016. These translate to an increase in the district’s “fair share” payment to the state.

What’s “fair share,” you ask? For the answer, you have to go for a swim in the shark-infested waters of California school funding.

So-called “fair share” contributions aim to share the pain of budget cuts by – here’s where the shark metaphor comes in – taking money away from basic aid districts in the same proportion as revenue limited districts’ budgets are dropping. In other words, if the budgets of revenue-limited districts drop by a certain percentage, the basic aid district budgets are equally diminished though higher “fair share” payments.

This punitive scheme was born in the California Supreme Court’s 1976 decision Serrano v. Priest, where the court ruled that financing schools with local property taxes violated the State Constitution’s Equal Protection Clause. Thus, property tax rates and per pupil expenditures had to be equalized.

Then in 1978 Prop 13 was passed, radically cutting property taxes, which effectively shifted school funding from local property taxes to the state’s general fund as more and more school districts became revenue-limited according the state formula.