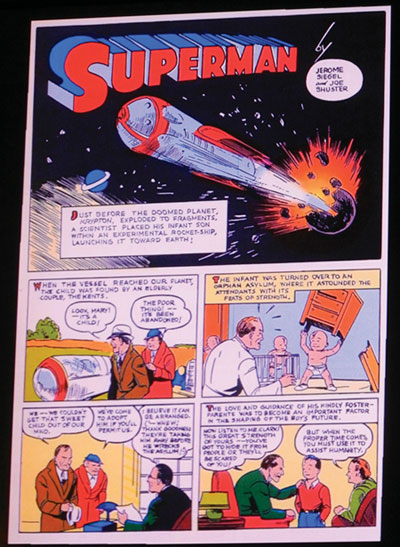 Superman, Batman, and Wonder Woman are world saviors. Their stories, much like the story of Gilgamesh, Dionysus, and other deities, were created when the world was in a time of turmoil.

“Every time civilization falls into disarray, a new superhero rises – every time, without fail,” said Preston Metcalf, chief curator at the Triton Museum of Art during the first of his “At the Edge of Art History” lecture series, “All in Color for a Dime.” “Whenever civilization goes into a time of trouble, you can bank on it – somehow, in some art form, be it literature, fine art, comic books, movies, a hero will rise and that hero will tell the exact same story without any variation, every single time… It’s human nature. We want something bigger than ourselves and when the world crushes us down, we seek out psychology something that can lift us back up.”

In 1938, Superman burst onto the scene. Soon after, Batman hit the newsstands. As the World War II progressed and women became involved, they, too, got their own superhero – Wonder Woman.

Then, just as in all art forms, comic books went too far and bordered the grotesque. Comic books were censored. But then, the world changed again.

“World War II ended with two atomic bombs,” said Metcalf. “All of a sudden we can kill entire cities with the push of a button…Our world is more fragile than ever and people are frightened. Our old heroes have been put on a shelf. They have been called vile names. They have been degraded. Worse, they’ve been sanitized. So what happens? What always happens when this happens to a civilization – a new hero is born. A man by the name of Stan Lee, working with a succession of artists, introduces new super heroes, The Fantastic Four. And guess what? Even though the circumstances of their powers are different, the story slowly fills in. They get the same traits and the same qualities as any other super hero.”

“Comics are back,” continued Metcalf. “They’re popular and now we have an interesting development. All this time, comics have been influenced by so-called fine art, high art. We got the format from ancient Mesopotamia. We got the story from ancient Sumerian literature and religious practices. We got the actual style of the art from classical drawing, Renaissance art. Now the tables have turned. Fine art is floundering and along comes Andy Warhol…And he, in turn, influences Roy Lichtenstein who makes his entire career out of celebrating comics as high art, creating wonderful paintings. So we’ve now come full circle. High art influenced and created the comics and now comics have created high art. All the while we have been telling the same stories that have been told for four thousand years.”

“At the Edge of Art History” continues Thursday, February 21 at 7 p.m. with “When Art Becomes Me: Tattooing and Body Art from Ancient Times to the Present.” Drop in fee is $20. Additional information can be found at http://tritonmuseum.org/education_adults_arthistory.php.