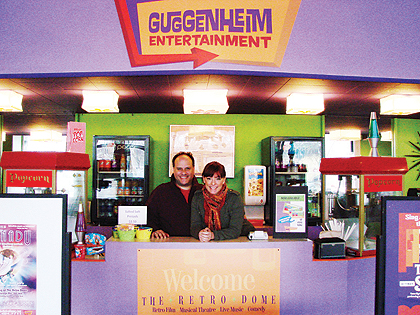 Dome-shaped theaters can be found across the Bay Area and while most of these round wonders are abandoned, passersby are reminded of days when these theaters were “the” spot for weekend entertainment. But, what if you could enter one and celebrate everything from your past? Would it not be fun to pretend it was 1972 and you were anxiously awaiting the release of The Godfather, or 1987 and your heart was fluttering because Dirty Dancing was the film of choice for your first date?

All of these feelings can return in just one trip to The Retro Dome. Located at the corner of Saratoga Avenue and Prospect Road in San Jose’s Westgate Shopping Center, The Retro Dome celebrates the past. Not only does The Retro Dome specialize in bringing older movies back to life, but it serves as a venue for live theater, and proprietors Scott and Shannon Guggenheim insist on making sure the experience at The Retro Dome is memorable. The Retro Dome’s two theaters show movies, live theater, and a combination of both during sing-a-long shows.

“Our sing-a-longs are our more successful movies,” said Scott Guggenheim. “For most of our sing-a-longs we have three actors hosting and doing crazy stuff – teaching everything beforehand. We did Willy Wonka as a sing-a-long and we served chocolate milk and chocolate.”

“When appropriate, we try to involve a fun bag and it usually has props to accentuate the show,” added his wife, Shannon Guggenheim. “So, for example, in Willy Wonka, they get the glasses that Mike TV puts on. In Mamma Mia! We give them the carnations that go along with it. So little things that go along with the show. In Mamma Mia!, for the money song, they throw money. It’s just fun. Just little gimmicky prop things that they do and then we give them even more. I mean, we’ve gone through the theater with drinks on platters and served them during the beach scene – just fun stuff like that.”

The Guggenheims and their partner, Scott’s brother, Stephen, choose the films revived on The Retro Dome’s screens by looking at a variety of different Criteria for example if an older movie is set for a remake. They look at the AFI Top 100 in every category to come up with a wide-variety of film choices. “We do try to keep a good range during the month,” said Shannon Guggenheim. “We have a classic once a month. We try to have a sing-a-long interactive event once a month. We try to have a family-friendly movie, and action or thriller once a month, but our fans are really crying out for these sing-a-longs so we are trying to get one in every month.” They also listen to what viewers want and try to accommodate their desire for good, entertaining cinema.

If that wasn’t reason enough to visit, everything about The Retro Dome is fun. The concession stands serve retro foods like Pop Tarts, Ho Hos and Pop Rocks alongside standard hot dogs and nachos. The popcorn poppers look as if they were pulled from an antique store and even the seating, which was absent when the Guggenheims took over the space, and curtains at The Retro Dome are special.

“We tried to get very eco-friendly in the way that we solved the [seating] problem. We went to all of the vacant or abandoned theaters that were no longer running in the Bay Area and salvaged the front two rows assuming those would get the least amount of use because no one is sitting up there. That’s what both theaters are made of: the two front rows of all of the Syufy theaters in the area,” said Shannon Guggenheim.

“[The theaters] aren’t allowed to show movies so they’ve got empty buildings and they gave us the first two rows and then Richard, one of our costumers, actually made every curtain in both theaters,” added Scott Guggenheim.

However, as fun as The Retro Dome is, it’s what people leave with that’s unique. “When people leave I want them to take that experience with them and remember that you can’t get that anywhere else. You want to come and watch it here with other people and then stand in the lobby and talk about it with other people,” said Shannon Guggenheim.

“Our guests don’t leave when they’re done. It’s very different,” she continued. “When you leave AMC, you walk out. Our guests stay and they talk to each other and not just their friends but the other people….[Filmmakers] want you to see [films] with other people so that you all laugh together in the same place that you all gasp in the same place and that you all applaud in the same place. It’s not designed to be an isolated, private experience. That’s what I want. I want people to leave and say I need to do this more. I need to remember how much fun I had with 200 other people singing along with Pierce Brosnan in Mamma Mia!. You want that common experience and I think it’s important.”

Additional information on The Retro Dome’s upcoming movies and events including information on the current stage show, Xanadu, can be found at www.theretrodome.com.

My Summer Story AKA It Runs in the Family / Film released in 1994 not rated in it’s current version.

Arts & Entertainment
Author AdminPosted on January 23, 2013
Starting Arts in conjunction with Cabrillo Middle School performed “Meet the Creeps” on January 10-11. The show tells the tale of the Creeps, a...
Arts & Entertainment
Author April J. JonesPosted on March 30, 2011
Situated on the corner of El Camino Real and Los Padres Boulevard in Santa Clara is a nostalgic building with a distinctive clay tile...