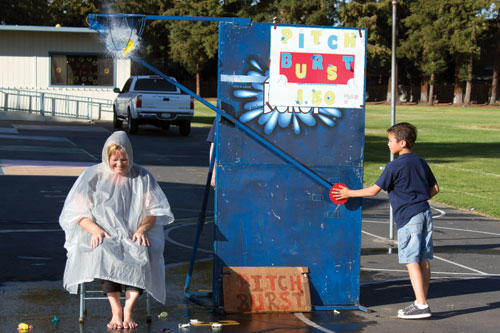 The warm weather quickly cooled as students of Westwood Elementary School ventured out on the evening of Oct. 19 for the school’s annual Fall Festival.

“It’s our biggest fundraiser and community event of the year,” said Westwood PTA President Sarah Hedges. “All of the classes work on it. People volunteer to create a basket that we auction off. Local vendors also supply items for auctioning and each classroom is responsible for a booth – it could be a game booth or a craft booth – and they take responsibility for setting that up…I think it’s a great day out. We’ve got food; we’ve got the booths and…we’ve got people who come back from previous years so it’s just a big event.”

To participate in an activity like kicking a soccer ball accurately or hitting a target to drench one of the teachers, each student presented a $5 ticket and the cost of the game (usually between .50 and $1.50) was marked off, allowing them to try multiple things before purchasing a new ticket. And, in addition to the favorites like the giant inflatable slide, there were a few new things for students to try.

“We have pumpkin races taking place this year, and it’s really, really fun,” said Westwood Principal Andrew Lucia. “They’re on these skates that were made by one of our parents and they have a cool ramp that kids are sending their pumpkins down. We have the 25 foot slide, which is just incredible to slide down for kids and instead of a haunted house, this year we have a haunted science lab. They took over the science room and did a theme that is really creeping kids out.”

Second-grader Danielle Grattidge arrived and immediately started participating in the games. “I did the soccer thing over there and some karate,” she said, adding that she takes judo and karate classes. “I’m looking forward to the haunted house.”

Classmate Timothy Jackson Atchley was excited to be at the event. “I really love Fall Festival. I go to it every year. I’ve done the Pumpkin Race over there. I’ve done the Duck Pond and I’ve gotten cotton candy…I’ve also done the haunted lair…I really want to do the bounce house thing.”

While the students were noshing on nachos and picking lollipops for prizes, parents were perusing the cafeteria, which was filled with silent auction items ranging from a signed football by San Francisco 49ers head coach Jim Harbaugh to dinners out, and tickets to museums to the ever-popular “Time with Teacher,” giving the winning student time outside of the classroom with their teacher.

Last year, the festival raised about $15,600, which is used to send each student on two field trips per year. “It’s just a fun event for the whole community,” said Hedges.