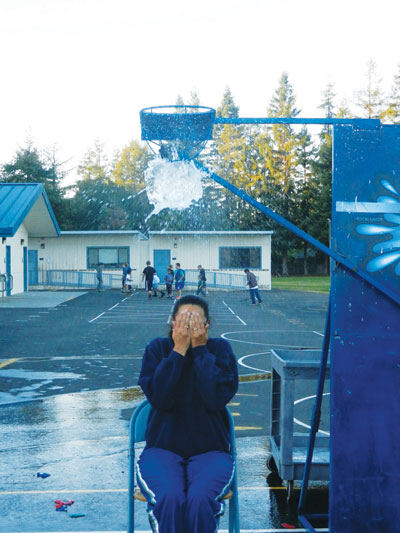 Giggles and screams of delight could be heard as families approached Westwood Elementary School’s annual Fall Festival and Silent Auction on October 20.

“This is the annual Fall Festival,” said Principal Andrew Lucia. “It’s a PTA run event that’s definitely supported by the school. The funds from this go to support the field trips. Every class gets 3-4 field trips a year and this brings in the bulk of that donated money…They went to Peralta Adobe last week, the fourth graders did. The fifth graders go to Western Ho, which is a social studies curriculum field trip. They go to San Francisco and visit some museums up there. The kindergarten/first grade, they all go on a variety of field trips. We also have a preschool program here for autism students and they went to a farm last week – Prusch Farm [in San Jose].”

From a hockey-themed game where the goal was to score on a cutout goalie with a photo of Lucia affixed to its head to a haunted house that was decorated an ran by the fifth graders, there was something for everyone – even the teachers got in on the action by volunteering to sit under a water balloon while students tried to hit a target and drench their favorite Westwood staff member.

“The fifth grade students are the ones who designed, decorated and are acting in the Haunted House and that’s over there in one of the portables,” said Lucia. “Every classroom has taken a booth and has prizes for that booth… The tickets are like 50 cents a piece and everything is 1-2 tickets per event. Each class had to pull together a basket which will be auctioned off in addition to everything else.”

Along with the class-created baskets, items in the silent auction ranged from a football signed by the San Francisco 49ers’ Frank Gore to winery tours and rounds of golf, but the most coveted item up for bidding was “Time with Teacher.”

“What happens with most fall festivals in the area is that the teachers set up Time with Teacher so kids and parents can bid on that as well,” said Lucia. “That can be from having a picnic on the backfield to going for ice cream to spending a Saturday at Build A Bear. [It’s] to build the student, parent, teacher relationship. And then there’s one teacher this year who has a beautiful Porsche so this is really Time with Teacher for the parents. He’s going to take them up Highway 9 through Saratoga to Alice’s Restaurant, which is up at the summit there and spend a couple of hours up there for a nice, top down ride. That’s [fifth grade teacher] Mr. [Mark] Harrington – room 17.”

SCUSD Doesn't Have an Achievement Gap: America Does

Community Schools
Author Diane AndrewsPosted on February 3, 2016
When the Wilcox High School Chargers beat the Fremont High School Firebirds in Varsity basketball 61-43 on January 22 at Wilcox, it was not...

Schools
Author Atoosa SavarnejadPosted on May 2, 2018
“Don’t take away opportunity!” That was the resounding cry of half a dozen attendees at the Santa Clara Unified School District’s board meeting on...