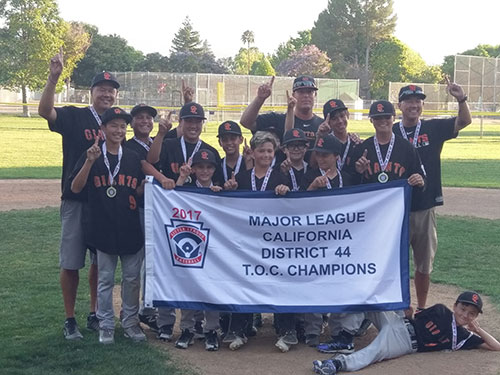 The Santa Clara Westside Giants are District 44 Major Division TOC Champions for 2017. With a 9-2 victory over the Moreland Nationals in the championship game, the Giants completed the single elimination tournament with little drama.

After winning their opening-round game on Thursday by a 13-3 final, the Giants followed up by defeating the Cupertino Giants 16-6 in the semifinal. Former Homestead Little Leaguer Eric Honer stood the tallest among all the Giants on Saturday as he helped settle things down on the mound. Cupertino opened up a 3-0 lead in the top of the first, but Honer struck out the side after taking over as pitcher just four batters into the game.

Honer wasn’t only a shot in the arm on the rubber, but he was also a huge catalyst with the bat. In the first inning he drove a single through the five-and-a-half hole that ended up going all the way to the outfield fence. His next at bat saw him scorch a line-drive double into right-center field gap. He would later add a sacrifice fly, his fourth RBI on the day.

“The first one, the single, coach told me to take the first pitch,” acknowledged Honer. “So I saw what it looked like and then timed it up. The second one, another base hit and I was able to get to third. It was a fastball middle away at the belt.”

Behind Honer, the Giants looked like eerily reminiscent of the Wilcox Chargers as they turned two impressive double plays. With 60-foot bases in Little League, double plays are difficult to turn. However, both shortstop Jayce Dobie and second baseman Ryan Hauck made quick turns at second base to finish off double plays.

“We communicate well,” admitted Hauck on the chemistry between middle infielders. “That’s how we turn the double plays and get it done.”

Hauck also had a nice day at the dish, going two-for-two with three RBI. Dobie meanwhile added a scorching double down the left field line just past the third baseman before adding a home run in the fourth. The middle infielders were certainly impressive, but the game ball belonged to Honer.

“He’s been that way all season. He’s a guy I can look to to come in when I need strikes and need outs,” commented Head Coach Jeff Hauck on Honer’s performance. “He hasn’t slowed down all season, he’s been a top hitter all season too, he’s a very good hitter.”

During Monday’s championship, it was Dobie dazzling on the mound while Kailan Chao delivered the clutch, game-winning knock. With a 2-2 score in the top of the fourth, Chao blasted a two-run homer to left center field.

“Last year my first home run was after being beaned,” recalled Chao, who was beaned in his previous at bat before his home run on Monday. “When I get beaned, I usually try to get them back. Took them deep, I was pumped up again.”

Moreland immediately made a pitching change, but it was clear they didn’t have another pitcher nearly strong enough to keep the game close. The Giants tacked on another five runs in the top of the fifth. A two-run Honer homer increased the lead to 6-2, before the Giants kept tacking on. Cooper Anderson followed Honer’s homer with a deep triple down the right-field line. Logan Vieira and Chao added RBI singles in the inning, increasing the lead to seven.

The defensive gem on Monday came courtesy of center fielder Orlando Lewis. With a runner on first and two outs in the bottom of the first, a bloop single landed in shallow right center. Lewis came up with the ball and threw out the lead runner who was trying to go first to third on the play. It was a big inning-ending web gem. That play helped allow Dobie to pitch an eventual complete game.

“I pre-pitched, so I pretty much knew ahead of time where I was gonna throw if it was hit to me,” recalled Lewis on the play. “He was going, so I threw to third.”

“[Orlando] has been one of our core six,” commented coach Hauck. “He knows where to go when he gets the ball and that’s why he’s out there. Most kids don’t like playing the outfield because they think ‘oh we’re not good players if we play outfield,’ but I trust him in the outfield, that’s the reason he is there.”

Next up for Westside will be the All Star tournaments. Westside will have three separate teams competing, including a 9-10 year-old squad, as well as 10-11 and 11-12.

Sports
Author Aubrie TolliverPosted on June 24, 2015
The Little League Baseball teams of Santa Clara began post-season play this past week in the annual District 44 Tournament of Champions. Teams in...

Sports
Author Melissa McKenziePosted on February 23, 2011
When Santa Clara University senior Lena Gipson tore her ACL the summer before her senior year of high school she was told she would...

Sports
Author Andrew BenschPosted on December 23, 2019
The Wilcox varsity basketball team is facing an extremely tough challenge early on this season. Not only did the team lose three key seniors...
SPONSORED