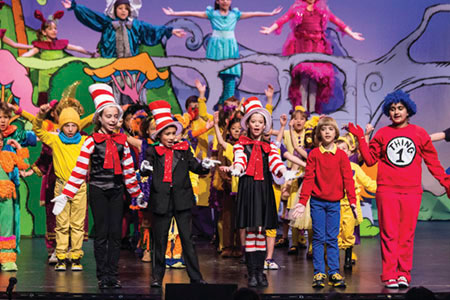 “This year we have 172 students and 51 parents and staff participating in our play,” said parent volunteer Wendy Guttman. “Our drama program is run almost entirely by parent volunteers, with a few paid production staff such as directors, choreographer, and our technical team running the lights and sound. Every family provides 15-20 hours of volunteer time on teams that include costumes, set building and painting and rehearsal supervision.”

In addition to the two student casts, WOE performs its play with a cast that included parents and teachers. Kindergarteners and first graders also got into the act by participating in a pre-show consisting of a couple of songs and spoken words complementing the stage show.

“All kids are welcome to participate,” said Guttman. “Anyone who wants to audition can. Students don’ t have to audition but if they want a speaking part, they have to audition…We have them choose three or four primary and three or four secondary and some ensemble roles and tell them that we don’ t guarantee anything, but we try to give them one of their choices…Sometimes we have third graders with the lead role and sometimes it’ s fifth graders.”

The play originally started as a fundraiser for the self-sustaining theater program at the school. “We don’ t take money from the school,” said Guttman. “Whatever we raise is what we have for the program…Ticket sales are the big thing. We used to do it in the cafeteria where we couldn’ t seat as many people. Now we have 425 sets. All of the kids’ shows sell out…We also ask for a small donation to be in the play and that helps pay for it.”

WOE first produced Seussical the Musical, based on the books of Dr. Seuss, five years ago. The performance has all of the bright, bold colors that can be expected of children’ s publications. It is also jam packed with songs and contains minimal dialogue.

What was most surprising about the WOE performance is how polished the children were. For a group of students with minimal vocal and theater training, the second through fifth graders were pretty outstanding. The amount of work put into the play by the students, staff and volunteers was quite impressive – as were the professional-looking sets and charming costumes.

Washington Open Elementary School is at 270 Washington Street in Santa Clara. In addition to kindergarten through fifth grade education, the school offers a variety of after school enrichment activities including the theater and choral programs. Visit http://woe-scusd-ca.schoolloop.com/ for more information.

Thanks For the Memories...