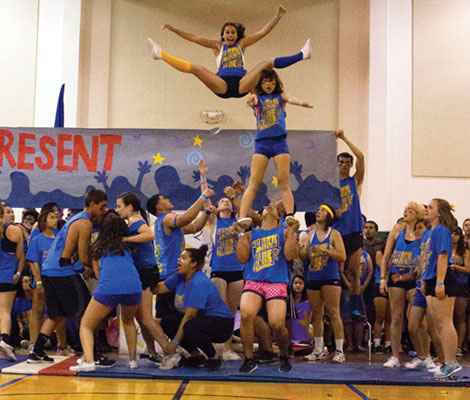 It’s only been happening for four years, but the excitement and enthusiasm for the Black and Blue Olympics, pitting the Santa Clara High School Bruins against the Wilcox Chargers in an all-school challenge, is incredible.

On April 5, Wilcox, having won last year’s BBO after losing the first two competitions, walked into the Youth Activity Center screaming and yelling. They wanted to win and needed everyone else to know it. Santa Clara, however, arrived in a much more subdued way, choosing to let their skill speak for itself.

For the 2013 “War for Four” competition, Teen Center Recreation Coordinator Rich Casem, “the hostess with the mostest,” put together an event schedule consisting of nine events and challenges, with the two most entertaining being “5 Minutes of Fame,” where each school creates and choreographs a five minute routine that will impress the judges, and “FTW,” which is a 10 minute mega-mix of songs that require a handful of students to entertain the crowd and the judges (both of these judged events were scored after the physical challenges). A total of 16 points was awarded.

“[BBO] is something fun we do with the kids,” said Casem. “It’s about collaboration and school unity…the kids get excited and it proves there is such a thing as school pride.”

After halftime, the score was tied at 2 apiece. When it was time to give the scores for the judged events, Wilcox had pulled out to a commanding 8-5 lead. But, as luck would have it, there were exactly three points to be awarded. Santa Clara clearly won “5 Minutes of Fame” by taking the judges on a dance-centered trip through time. But, Wilcox came out swinging in the FTW challenge – they had energy and all the makings of a win. However, those points were awarded to Santa Clara after Wilcox was disqualified by the judges. It would come down to a tie breaker – a nail biting final event that allowed Wilcox to claim BBO victory. 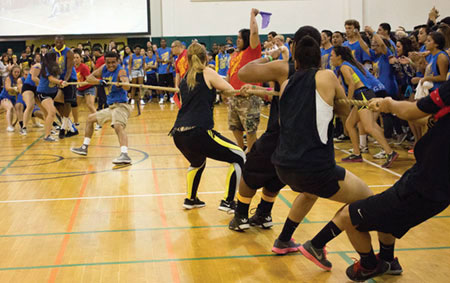 “It feels really good to be champion,” said Wilcox senior, ASB president, and co-captain Kevin Lee. “I have my ASB returnees to lead the house next year and take the championship a third time. I have faith in them.”

“I think we definitely deserved it,” added Wilcox senior and co-captain Robert Fairclough. “It was a great win and a fantastic night. SC definitely put up a fight, but we prevailed in the end.”

Despite not winning, Santa Clara students were pleased with their efforts. 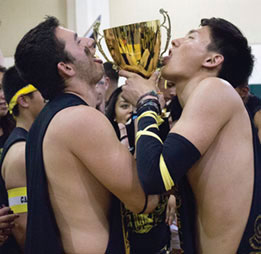 “As a school I didn’t expect us to do as well as this,” said Santa Clara senior, ASB president, and co-captain Roger Kim. “I’m very surprised and very proud of my school. We actually caught up at the end. We had [only] two weeks, which is not nearly enough time to prepare and be well-prepared for an event like this.”

Even though Kim, and co-captain senior Connor James won’t be back for next year’s BBO, they are confident in the skills of their school.

“[They need to] stay motivated,” said James. “They need to keep positive energy and not let these past two years affect them. They should remember that the first two years of this event, we dominated Wilcox and we will obviously be able to come back again and beat them one more time, and for plenty of years to come.”