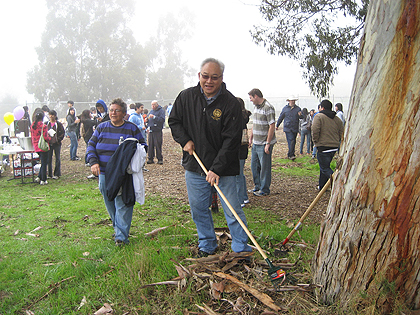 “Life’s most persistent and urgent question is ‘What are you doing for others,'” American civil rights leader Martin Luther King, Jr., once said.

On a cool, foggy morning more than four decades after King’s April 4, 1968, assassination, over 200 volunteers at Ulistac Natural Area honored his memory by observing his national holiday January 17 as a day of service rather than a day to sleep in.

Fong and other volunteers picked up trash, pulled weeds, and planted more than 100 native California plants in one-gallon containers. Mainly ceanothus, California sage, and blue-eyed grass, the plants had been purchased with grant money administered by the all-volunteer Ulistac Natural Area Restoration & Education Project (UNAREP), according to board member Dennis Dowling.

“This is a good community service we can provide for our district residents,” says Fong (asm.ca.gov/fong), who personally paid for the water, coffee, and 20 dozen donuts to fuel the volunteers.

“Martin Luther King, Jr., is very important not only as a champion of civil rights but as a champion of public service. On top of other events today, over one million people [nationwide] are doing service,” Fong says. The national holiday honoring the Reverend Dr. Martin Luther King, Jr., is observed the third Monday in January and was first observed 25 years ago in 1986.

At 11 a.m., Katelyn Tang from San Jose and three of her Silver Creek High School friends were filling their third bag with trash and litter. “It’s nice to be walking around nature enjoying yourself while helping your community,” says Tang. “Martin Luther King gave himself to help better the world, and we should do this small thing to help give back.”

As an Eagle Scout project, Joey Brett (joey.brett@yahoo.com), a member of Sunnyvale Troop 443 and a Wilcox High School sophomore, built a vernal pond—a small pond which normally dries up in the summer—to provide butterfly larvae and mature butterflies with a water source and attract them to Ulistac’s butterfly garden. The garden is planted with about 700 native shrubs and plants selected to attract, feed, and shelter the dwindling Monarchs and other native butterflies.

Twenty-seven San Jose Conservation Corps and Charter School students removed invasive plants and planted shrubs. Neil Kozuma, Deputy Director of the school for disadvantaged young men and women (sjcccharterschool.org), says, “All our volunteers are minorities. They are aware that their civil rights have to be protected. The battle still continues.”

Ulistac Natural Area, on Lick Mill Boulevard between Tasman Drive and Hope Drive, was a city golf course until 1988. It was rescued from housing development and designated a city park in 1997. It opened to the public almost ten years ago, on May 12, 2001, and its restoration as a natural area continues thanks to the regular monthly efforts of volunteers and special work days such as the Martin Luther King, Jr., day of service. Information: scu.edu/envs/ulistac; ulistac@scu.edu; 408/554-5419.