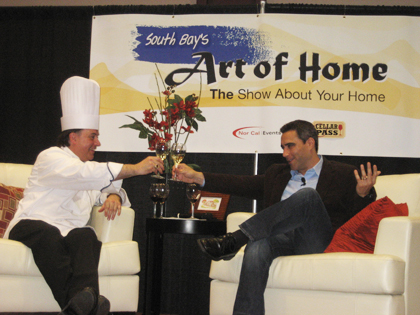 “The height of a chef’s hat reflects status in the kitchen. The higher the hat, the higher the status,” says chef Daniel Arias, head of CHAMPS, the Culinary, Hospitality, and Management Preparation Program for students at Santa Clara’s Wilcox High School. Arias was wearing a high-peaked, stiff, European pastry chef hat, white with vertical pleats. “I like it because it has a slimming effect,” he says, lifting his chin and puffing his broad chest.

Arias’s hat has fewer pleats than the traditional chef’s hat—the “egghead”—which has a hundred pleats for a hundred different ways any chef worth his salt can prepare an egg. Arias was at South Bay’s Art of Home Show, held at the Santa Clara Convention Center January 21 through 23, to supervise the floppy-hatted student chefs from CHAMPS, who were assisting the two headlining super chefs at the show and also giving their own Malaysian cooking demonstration Saturday.

“I was here last weekend at the travel show and had such a good time I decided to come back. This is bigger,” says Carol Schell from Gilroy, hanging out in the wine garden with friends. She posed for a photo with super chef Sir Roy Salazar, a glass of wine in one hand and a sample of his Steak Florentine pasta style in the other. “$10 to taste a bunch of wines is a good deal,” she says.

Sir Roy, who wore the highest chef’s hat of all, has been knighted on three continents—Africa, Asia, and Europe.

“That’s how good your food is?” says television personality Anthony Gilardi to Sir Roy during a live filming in the wine garden of Gilardi’s HDTV show, “The Wine Guy Unplugged.”

“Yes, that’s how good my food is!” says Sir Roy as the cameras were rolling.

“Now I have a new goal in life,” says Gilardi. “To be knighted.”

“I like to bring back classics and make them local, give them a twist,” says Sir Roy, pointing out how his tri tips Florentine were plated on pasta rather than on a bare plate.

Gilardi and Sir Roy discussed food and wine pairings. “If it’s good in your mouth, it’s right, and nobody’s going to tell me that I’m wrong,” says Gilardi. “I’m unplugged because I don’t have any rules. We’re drinking wine, not taking a science exam. It’s what you like.”

“It’s what you like, but it’s also science,” says Sir Roy, explaining how protein in food attracts the tannin in red wine and makes the wine taste less astringent. “Matching wine and food comes naturally to us. Follow your instincts.”

Super chef and television cooking show personality Martin Yan was on the main stage demonstrating his slicing prowess, key to preparing the Chinese and pan-Asian food he and Cory Chen, his partner, prepare at their Santa Clara restaurant, Yan Can, 3927 Rivermark Plaza.

In a heartbeat, with a steel knife blade the size of a meat cleaver flashing and moving forward and his fingers bent just out of the way and retreating from the knife, Yan turned a small cucumber into 50 wafer-thin slices. Then he transferred them all at once onto a plate and arranged them in the shape of a heart. “If Yan can, so can you. If Yan can’t, don’t even try!” declares Yan to his rapt audience.

“I can feed twenty-five thousand people with one tomato,” he says, slicing next into a tomato.

“When I was young, I couldn’t afford a chef’s hat,” says Yan, who now chooses not to wear one by preference. “You’ve got to have confidence,” he tells the CHAMPS student chefs assisting him on stage. “Never say, ‘I can’t.’ Say, ‘I will try.'”

“These are our rising star chefs, our upcoming masters, our iron chefs,” says Yan. “You can always find a job,” he tells them, ending with a Chinese saying: A nation survives because the people are well fed.

Hats off to all the food and wine stars of South Bay’s Art of Home Show (southbayhomeshow.com), including the hatless master chef Julie Tan, an instructor at the California Culinary Academy, San Francisco, and wife of Sir Roy. Hats off as well to James Kuenzi, Bob Ray, and Linda Cook, show owners and producers, for making the show fun and interesting even for those not remodeling, retrofitting, or redecorating a house. Of course, as always, the show also provided valuable information for those who do want to make changes around the house.