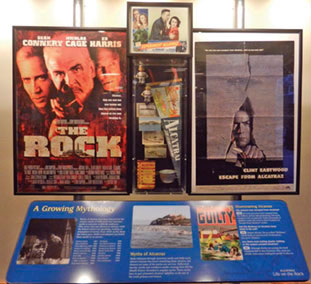 Alcatraz Island has a long, storied history. It has served as a military and federal prison, abode to aboriginal people, and home to a seabird colony, making it one of the premier attractions in San Francisco. As popular as the location is, there are plenty of people who live and grew up in the Bay Area who have not had the opportunity to experience the National Historic Landmark. But now, thanks to collaboration between Alcatraz Cruises and Academy Studios, South Bay locals can visit The Rock without traveling to the city.

While not a replacement for a trip to the famed island, the “Alcatraz: Life on the Rock” exhibit in the Hyatt Regency Santa Clara’s lobby offers an introduction to Alcatraz, complete with a model of the locale and look at its place among history and in movies. The island’s military history is documented, and the exhibit contains a replica of a prison cell – one that was occupied by many during the 30 years (1933-1963) Alcatraz was home to federal inmates – video compilation explaining the Native American occupation, and information on the current effort to preserve the landmark. Additionally, there is a photo exhibition, “Alcatraz: The Last Day,” by Leigh Wiener showing – as one would guess – the last day of the prison’s service on March 21, 1963. 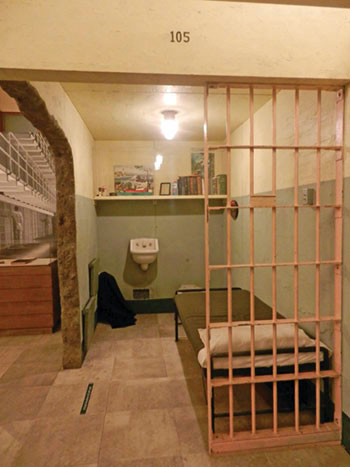 “There are a lot of details in the exhibit,” said Mark Walhimer, who was the chief operating officer of Academy Studios when the project was conceived. “Because the penitentiary was built on top of the fort, the inmates used the blocks from the fort to build the penitentiary. When you look at the details of the exhibit you can see we used blocks to build it. We did things like we met with the historians to figure out how to make the it look exactly right – like the doors to the cells and the paint of the control room…We went back and we worked with the archive for the photographs that are in the recreation of the cell…[and] Mr. [Jim] Albright, who was an officer on Alcatraz, lent [the items in the front case].”

“Alcatraz: Life on the Rock” and “Alcatraz: The Last Day” are free and open to the public 24 hours a day, seven days a week, at the Hyatt Regency Santa Clara, 5101 Great America Pkwy. The exhibit, which will be on display until February 2014, allows travelers, business people, families, and schools to get a small taste of Alcatraz Island.

“The Hyatt Regency Santa Clara is just thrilled to have ‘Alcatraz: Life on the Rock’ here,” said General Manager Dania Duke. “We welcome anybody in the community. We welcome schools, families, to come and take a look. We’d love to have them come through and be part of the experience here.”

Call the Hyatt at 408-200-1234 or visit http://www.alcatrazcruises.com/exhibit/index.html for more information. Visit www.alcatrazcruises.com to book a trip to Alcatraz Island. Those who are planning a trip might be interested in knowing that former inmate William Baker will be visiting the island every Wednesday-Friday in January (except Wednesday, January 1) to sign copies of his book, “Alcatraz-1259.”

This Magic Moment: Holiday Train with Santa Aboard Lights Up the Night

Looking Back - Week of January 1

Community Public Safety
Author Dan MorenoPosted on November 21, 2012
On Thursday, October 25, five Santa Clara police officers took several high school students from Santa Clara, Wilcox, and New Valley High Schools on...
Community
Author Kathy DongPosted on May 16, 2012
If you asked me two months ago, “What do you want to be someday,” I probably would have said, “I don’t know.” I might...
SPONSORED