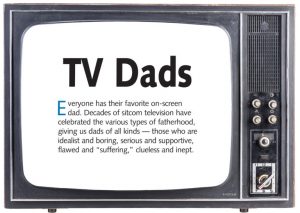 But all of these dads had one thing in common: They loved their children.

The thoughtful father, he comes home from work every day to put out fires created by his two children — ranging from homework to prom dates. He is known for his sage advice and even temper.

The widower father. Losing his wife when his son was “the least littlespeck of a baby,” Sheriff Taylor learned to be both parents to Opie. His parenting style is caring but laid back, and he tries to be a model citizen for his son, often active in the community. He even serves on the town council and various other volunteer positions within the sleepy town.

All in the Family (1971 TV series), played by Carroll O’Connor

The gruff father. Archie is known for his overbearing demeanor and is not afraid to voice his often-bigoted opinions. This conservative, ill-tempered, blue-collar dad fathers with love, though it can be hard to see at times.

The incompetent father. Homer is known for being clumsy, rude, self-centered and ignorant. Despite these faults, Simpson is incredibly loyal and fiercely devoted to his family. He might not be the best father, but he never stops trying.

The indulgent father. Ray works hard as the family’s sole provider and loves his family, though he finds them annoying quite a bit of the time. Ray has a hard time disciplining his three children and finds every excuse to avoid any sort of housework. He is still spoiled by his own mother, which keeps him in “child father” status.