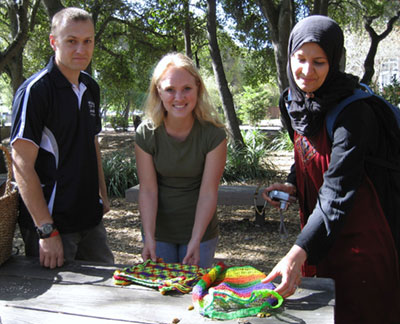 “Where in the world is Naduri? Where is New Guinea?” are the first questions people ask when Peter and Karie Stephens tell them about their plan to take their two young sons to Naduri during summer vacation.

The village of Naduri is located in a remote, mountainous area of Papua New Guinea and can be reached only by footpath or in an aircraft light enough to land on its single grass airstrip. It has about 300 adults, an uncounted number of children, no electricity, and no hot and cold running water. Naduri is so remote that even Google Maps has trouble pinpointing it.

Drawn by the dual call of mission and adventure, the Santa Clara couple and their sons, Mikey, six, and Mason, four, will embark on a one-week trip to install solar panels on the village’s only school—an elementary school completed in March by the nonprofit Kokoda Track Foundation (www.kokodatrackfoundation.org), based south of New Guinea in Sydney, Australia.

“We want our boys to know about the kids in Naduri. Our boys have so much, and we don’t want them growing up thinking it’s normal,” says Karie. “We want them to know that just because people live far away doesn’t mean that they’re strange.”

Even the Stephens had never heard of far-away Naduri before Peter and his father embarked in August 2012 on a 60-mile trek along the Kokoda Track—an old, single-lane trade route that crosses the Owen Stanley Mountain Range, which separates the east and west coasts of New Guinea.

During WWII, Australian troops battled Japanese troops along the track. With the help of locals from villages such as Kokoda and Naduri, the Australians prevailed, preventing the Japanese from reaching and invading Australia.

Stephens—a Santa Clara police officer—and his dad, Noel Stephens—originally an Australian but now a U.S. citizen, spent eight days hiking the steep, muddy track. Naduri, adopted by trek organizer BackTrack Adventures, was one of the villages they visited along the way.

Seventh Day Adventist missionaries long ago brought Christianity to New Guinea, and when a Naduri village elder learned that Stephens’ dad was a retired Methodist minister, the elder told them that the village needed Bibles and a solar panel for their church. Stephens’ dad sent the Bibles. Now Stephens and his family are installing the solar panel, but on the school instead.

“I really think it’s great that the love of Jesus has stayed there,” says Karie. “We think of the villagers as our brothers and sisters, and I’m excited because we’re in a position to fill their need.”

Stephens is purchasing the solar panel kit from a New Guinea company. He plans to travel to Ohio in May for training in how to install solar panels and will train the villagers to maintain the installation, which will power lights, fans, and projectors.

The Stephens, both former Marines, are raising money to offset the mission cost of about $15,000 with the help of their church, the First Presbyterian Church of Santa Clara. For more information, including how to make a tax-deductible contribution to Power Up Papua, visit www.poweruppapua.com.

New Guinea is the world’s second largest island, second only to Greenland. Its population of 7.5 million is comprised of almost 1,000 different tribal groups speaking about 1,000 languages, making New Guinea the most linguistically diverse area in the world. Luckily for the Stephens, English is the language for education and, if not English, people speak Tok Pisin, a language derived in part from pidgin English.

“Visiting New Guinea makes you take things slower,” says Peter. “The people in the villages don’t have iPhones and laptops—everything everybody in this area gets worked up about on a daily basis.”