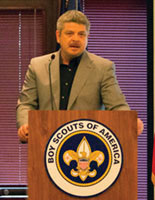 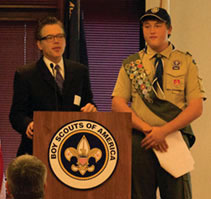 When San Jose Sharks Head Coach Todd McLellan was growing up in Canada, there were no Boy Scouts of America for him to join. Instead of hiking, camping and learning life skills through participating in activities with boys his age, McLellan joined sports teams. He talked about his experiences and how they relate to the need for scouting at the Silicon Valley Monterey Bay Council of Boy Scouts of America’s Community Leadership Breakfast on April 4.

“Young men crave the opportunity to belong to something or someone…You’ve got to find your place” said McLellan. “Young men will latch on to the first opportunity to belong to a team or to a group…It’s our job to bring these young men to these opportunities and get them to latch on. The alternative isn’t a real strong one, when you think about some of the other teams that are out and in our community. I’m going to be a bit of a negative guy right now, but I think of the gangs that exist in the community right now. They’re no different that our hockey club. They’re no different than the Scouting community, the Scouting club. They’re looking for members as well. They want to send their message out. They have a uniform. Uniforms are so important right now…I look at James [McArthur, a Scout who spoke at the breakfast] with his uniform on…Lean, cut, fit, badges of honor, smiling. There are other uniforms that exist with those other teams. The colors. The tattoos. It’s our job as community leaders to help James and his friends pick the right team.”

The event, held at David’s Conference Center (5131 Stars and Stripes Drive) in Santa Clara, was an invitation only breakfast with some of Scouting’s biggest supporters, including Sharks’ broadcaster and Eagle Scout Dan Rusanowsky.

“My involvement with the Boy Scouts, in my great years involved in Scouts, as a Scout, as an Eagle Scout, continues to the present and to an extent here this morning…One of the primary purposes of our community breakfast is to gather a lot of our business and community leaders to share the ideas about not only Scouting, but our world,” said Rusanowsky.

There was no cost to attend the breakfast, but diners were asked to make a tax-deductible donation to help support the 23,000 youth served by the SVMBC.

“I might never have had the opportunities that I’ve had if it wasn’t for the skills and self-confidence I learned from scouting,” said Council President Dick Noack. “We need scouting. And the character values and leadership it instills in young people today more than ever. The mission of the Boy Scouts of America is to prepare young people to make moral and ethical decisions throughout their lives by instilling in them the tenets of the scout oath and law. We still need that…Scouting happens wherever kids are…We are committed in positively changing the lives of even more young people…We are making progress but there is so much more than we can do.”

For more information on how to get involved with BSA in Santa Clara visit http://svmbc.org/svmbc/.