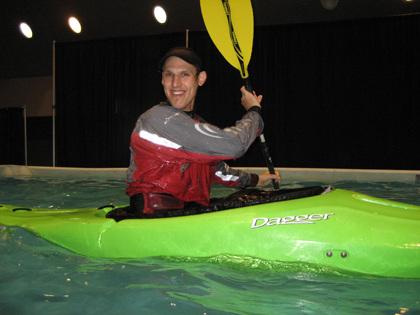 One day was not enough to take it all in. Two days and a game plan would have been ideal. Exciting possibilities for one’s life were proclaimed from stages and touted up and down aisles lined with more than 150 exhibitors grouped geographically at the 2011 Travel and Adventure Show (adventureexpo.com) at the Santa Clara Convention Center January 15 and 16. Traveling for the first time to Santa Clara, the show lived up to its promises of immediate thrills, inspiration to get up and go, and help in planning future adventures.

“Our lives could be so much more than they are now. Are you ready to get lost?” says Jennifer Baggett, travel blogger and writer of “The Lost Girls: Three Friends, Four Continents, and One Unconventional Detour around the World.”

“Did you make the meatballs? You’re killing me, Dude!” says Heather Holland from Sunnyvale to Chef Richard Pannell from Table 260 in Sacramento, blowing her nose repeatedly after trying his “Fire Hazard Meatballs.”

Pannell won the chefs’ Fiery Food Challenge demonstration by audience applause. “There are six different peppers in the meatballs and nine in the sauce,” says Pannell with bravado.

“What’s interesting about the show is how everyone has been brought together for the first time. There are so many offerings and so much information to pick up. It’s like a collective,” says Holland’s husband, Michael.

“It was fun. I wish it was longer!” says Kathy Doan-Walter from San Jose after breezing down a short zip line. Come spring, Doan-Walter can drive to Roaring Camp, Felton, in the Santa Cruz Mountains for GoZip, LLC’s new aerial ride through the redwoods (www.goziproaringcamp.com).

KCBS Radio and KRON 4 TV movie reviewer and film historian Jan Wahl (janwahl.com) is the only person who does her talk: “Movie Locations Make Great Vacations.” Wahl says “Sometimes movies inspire us to go to great locations. Or sometimes you can’t travel when you want to, but you can do it through a movie.”

“There’s no reason people of any age can’t scuba dive. I know people who didn’t take a class until 70,” says Big Wave Dave Reidenbach from BeADiver.com, the only company that promotes water sports for local businesses by transporting an 18,000-thousand gallon pool to shows.

The most cutting edge diving gear in the world is manufactured by Oceanic (Oceanicww.com), San Leandro, a family-owned business since 1972. Oceanic’s new split fin technology takes divers through the water faster with less effort. Oceanic’s HUD (hoseless underwater dive) mask has a built in computer that transmits essential diving information viewable with a downward glance.

The World Heritage Cultural Center’s Global Beats Stage with more than twenty local dance and music productions representing world cultures was the place to sit and rest while being entertained. “There are lots of parades and such that cater to only one kind of culture. We wanted to create a plan where everybody can share,” says Juan Carlos Gonzalez, WHCC co-founder (mywhcc.com).

“It’s been great,” says John Golicz, CEO of Unicomm, the Connecticut-based organization that produces the Travel and Adventure Show in select U.S. cities. “The exhibitors are raving about the quality of the people attending. They’re culturally-attuned travelers.”

A return trip to Santa Clara is in the cards for the Travel and Adventure Show. Some world destinations are definitely worth repeat visits—yet even then, one can’t see and do it all.

Local Youth Band Hopes To Leave No Members Behind