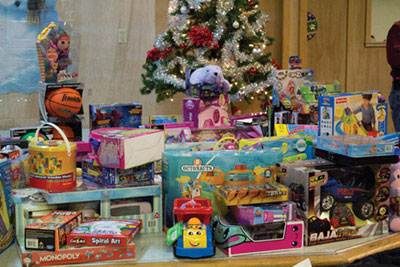 On Dec. 6, construction company Rudolph and Sletten teamed up with the Santa Clara Fire Department to hold a pot luck and toy drive at the Santa Clara Elks Lodge (1680 Martin Ave.). Admission to the event was an unwrapped childhood toy and pot luck dessert dish. Over 500 gifts and $500 in gift cards were given. “This was a grass roots event,” said John Elwood, project executive for Rudolph and Sletten. “The idea was developed between Steve Silva, City of Santa Clara’s Fire Marshal, and myself in 2009. We saw the need to do something during the height of the economic downturn in 2009. We decided to continue making it a sustainable event because of the ongoing need for families and children to enjoy a Christmas in spite of the current upswing in economy.

“It’s an ongoing partnership between Rudolph and Sletten and the City of Santa Clara’s Fire Department,” he continued. “Next year were are going to incorporate into the Toy Drive a canned food supplement to help support the local food banks. Recently, I saw statistics for Santa Clara County for the number of families who live day-to-day hungry, in search for food. Its terrible and if we can make a difference, we need to do so as a community. We are looking into taking immediate steps to start of food drive between now and the end of the year.” SCFD will distribute the toys collected to needy children in Silicon Valley on or before Christmas Day.

Stadium Talks That Started With a 2003 Letter, Built on Decades of City Work