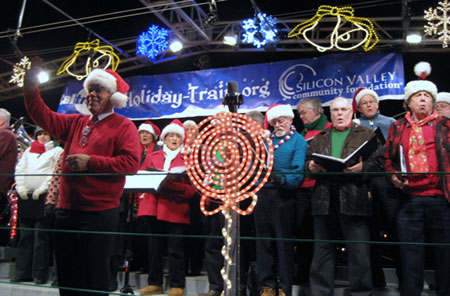 In finger-chilling weather that made it seem more like the North Pole than Santa Clara, a Salvation Army brass band played traditional holiday carols to a growing crowd of families that packed the Caltrain station platform the night of December 7. The families were awaiting the annual Caltrain Holiday Train, aglow with 60,000 festive lights and carrying Santa and Mrs. Claus.

When silver train number 920 Morgan Hill pulled into the station at 8:12 p.m., parents boosted children onto their shoulders to catch a first glimpse of Santa and his entourage of elves, toy soldiers, the gingerbread man, and Frosty as they disembarked for a 20-minute visit with the good little girls and boys.

“This gets you really excited for Christmas,” says 11-year-old Kiara, a Peterson Middle School sixth grader.

Then all too soon, the train sprang to life again. Santa waved goodbye from the caboose, and the train sped away into the cold night.

Eager to extend the magic of the evening, some families wandered into the warm train station, where the South Bay Historical Railroad Society was operating its model train displays, which are on permanent exhibit.

“It’s such a fun family event. The kids will have memories of getting together and doing this,” says Brownie Troop 60948 leader Toni Webb, who brought her Brownies to see the holiday train for the first time.

The holiday train, which visited nine Caltrain stations between San Francisco and Santa Clara the evenings of December 7 and 8, is presented by Silicon Valley Community Foundation in partnership with Caltrain, which decorates and runs the special show train.

Holiday festivities don’t come cheap. The foundation contributed $50,000 towards the approximate $100,000 cost of running the train and helps fundraise the difference. Santa’s train ride was also made possible by the contributions of a number of media and in-kind sponsors.

“It’s worth it,” says Mari Ellen Loijens with Silicon Valley Community Foundation. “Look around you at all these happy faces we have. There’s something magical about the train. Watching everyone come together to celebrate is very precious.”

To extend the holiday glow beyond the magic of that cold but heart-warming evening at the Caltain station, uniformed Marines were on hand to collect new toys for local children who might otherwise go without a gift from jolly old St. Nick. A hoped-for 4,000 toys will be distributed through the Salvation Army and the U.S. Marine Corps Reserve Toys for Tots program (http://www.toysfortots.org).

Community
Author Larry SacksPosted on November 23, 2011
Winners. Undefeated. First place. World Title. Read over the history of the Santa Clara Vanguard, and these words are repeated over and over. Victories...
Community
Author AdminPosted on May 4, 2011
Ongoing – Farmers Market Every Saturday morning The Downtown Santa Clara Farmers Market continues its popular year-round engagement every Saturday from 9 a.m. to...