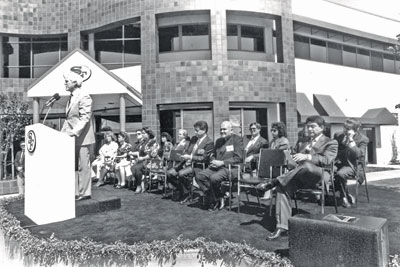 “This project was thought-about before I was born,” San Francisco 49ers owner Jed York told a group gathered for breakfast at Santa Clara’s Convention Center by the Santa Clara Chamber of Commerce Political Action Group last Thursday. He was speaking about Santa Clara’s new football stadium, groundbreaking which takes place this week.

“If you look at the infrastructure, that’s what drew us to Santa Clara. When you look at what you need to build a stadium, it’s here,” he continued, noting the future stadium’s proximity to major Bay Area highways, mass transit systems, and 40,000 parking spots that are virtually unused on Sundays afternoons. And with the 49ers training camp and headquarters in Santa Clara, the staff had personal experience of Santa Clara’s advantages.

“We were already working in Santa Clara,” says former 49ers VP of Corporate Communications Lisa Lang. “Every day we would drive by this huge expanse of Great America overflow parking. Every day we would use the freeways and expressways.

“They had invested in infrastructure in Santa Clara to build for Silicon Valley [growth],” she continues, listing the city’s features: “The easy freeway access, parking, the fact that the area was separated from residential neighborhoods. The City Council had already designated an entertainment district.”

One reason Santa Clara has all “the right stuff” is one of the most felicitous conjunctions in political history – the Wilber and Orville Wright, of Santa Clara politics – former Mayor Gary Gillmor and former City Manager Don Von Raesfeld.

Gillmor – a former Buchser High School civics teacher who put his money where his mouth was, so to speak, by actually serving in public office – and Von Raesfeld – a civil engineer and possibly the most progressive Republican since Theodore Roosevelt – had a matchless synergy that shaped the trajectory of Santa Clara growth, and laid a solid city infrastructure for generations to come.

Gillmor calls that infrastructure the city’s “holy trinity of success:” city-owned land and electricity, and strategic use of redevelopment funding.

“I wanted the city to make good investments,” Gillmor continues. “I saw the potential of that land [north of highway 101]. The land was cheap because there was no interchange for the highway. Before the interchange the only way to get there [the north side of Santa Clara] was Lafayette St.”

This was a solvable problem for the imaginative Gillmor and Von Raesfeld, who knew California’s Highway Commissioner Vernon Cristina. The commissioner made an appointment for them in the early 1970s to argue their case with Governor Ronald Reagan.

“We met with Reagan – and his jelly beans – and I had to listen to him for an hour knocking Democrats,” remembers Gillmor, who at the time was a registered Democrat. “He said the state didn’t have the money for the interchange. We said, ‘We’ll lend you the money.'”

And that’s exactly what Santa Clara did. It lent California the money that let CalTrans build the 101 interchange at Great America.

The second part of this trinity was the city-owned electric company, Gillmor says.

During his 24 years as City Manager, Von Raesfeld was a forceful advocate for publicly owned power and one of the architects of the city’s electrical power strategy. He led the expansion, growth and acquisition of power generation for the city, and was instrumental in getting the city power from the federal Central Valley hydroelectric project.

The third part of Santa Clara’s infrastructure trinity was foresighted use of California’s Redevelopment Agency law, allowing infrastructure – electric transmission, water and sewer lines – to be built in advance of development. “Urban renewal let you go in and prepare the site,” Von Raesfeld explains. “You borrow the money to build and the business that moves there raises the property values. The increased value pays for the infrastructure bonds.”

“Industry loved that because they didn’t have to build the infrastructure,” adds Gillmor. “It was much better for their cash flow.”

The city’s success was indisputable. In 1970 Santa Clara was voted number one in California for industry growth.

And when the stadium groundbreaking begins yet another new era in the life of the Mission City, Gillmor and Von Raesfeld intend to be there, connecting the city’s past, present and future.