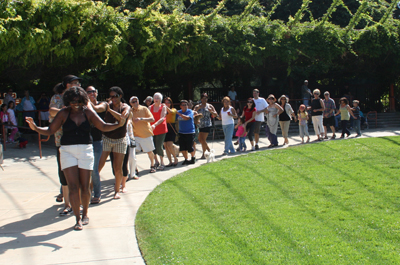 On Sunday, July 31 Harry Best & Shabang Steel Drum Band hit the Central Park stage to participate in the City of Santa Clara’s 2011 Concerts in the Park series. Playing Reggae, Calypso, Zouk and Soca rhythms, Shabang entertained a mellow crowd who got on their feet to form a Conga line during the groups final song, “Hot, Hot, Hot.” After exiting, Shabang came back with an encore of the Neil Diamond penned “Red, Red Wine”, a song made famous by UB40 in the 80s.

Next up is rock band Cool Under Pressure who will be playing a free show at Central Park on Sunday, August 7 from 2:30 p.m. to 4 p.m.