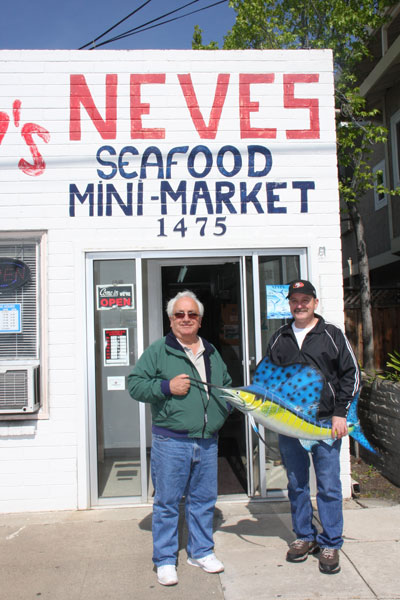 Neves Fish & Mini-Market, which opened in 1982, is no secret to the Portuguese population that makes up 90 percent of its customers. Anyone else trying to find the plain, white-washed market would miss it if they blinked while driving by.

“This store is the poorest and smallest store in Santa Clara, but the best. The Portuguese love this store,” says Neves. He brought his wife, Maria Adelia, and children to San Jose in July 1968 from the Azores, an archipelago of nine main volcanic islands in the North Atlantic Ocean.

Long-time customers Fatima and Joe Arroso are also from the Azores. They have lived in Santa Clara more than thirty years, yet they speak little English. Neves’s son Joe Neves, who manages the market, translates what they say.

“We worked and raised two kids. We understand some English, but we didn’t have time to study,” Joe translates. Santa Clara’s Portuguese population numbers around 4,000.

“The majority of Portuguese like fish,” says Neves. “The islands are surrounded by water, so you have to eat it whether you like it or not.”

Not all the market’s regular customers speak Portuguese.

“I know Antonio for a long time,” says Italian-born Santa Claran Giovanni Vitarelli, who shops at the market a couple times a week. “This is better than spaghetti and meatballs—always fresh fish.”

“I sell my customers only good, fresh fish. I prefer not to have fish if I can’t have good, fresh fish,” says Neves. The fish arrives from Vancouver, Canada, every Tuesday and Thursday.

Vitarelli buys a whole Canary Rock Cod; Topo—a spicy, buttery cheese from São Jorge island; and a round of Portuguese sweetbread (fresh daily). Vitarelli tears off a chunk of the sweetbread and eats it as he leaves the market.

“We never sell expensive fish. I know my customers, and Portuguese people don’t like expensive. I have to have good prices to keep my customers,” says Neves, who supposedly retired ten years ago but can’t resist coming to the store almost every day.

“I have good customers. Santa Clara is a place of good people. I have people who have come here since the door first opened, and now their grandchildren are coming. And the cemetery is full of my customers,” says Neves, who will sign ownership of the market over to his son on the market’s 30th anniversary August 12.

“This store is the best thing that happened in Santa Clara thirty years ago,” says Neves. “I opened the door, and Joe closes the door.”

“I’m very proud to serve the Portuguese community with my family’s market,” says Joe. “I’m happy to keep the store in business for at least another thirty years like my father did.”

The Portuguese Bakery at 2082 El Camino Real (near China Stix Restaurant) is also popular with the South Bay’s Portuguese population. Owner Mary Couto passed away in October 2011, but her children continue the family business. For information call (408) 984-2234.