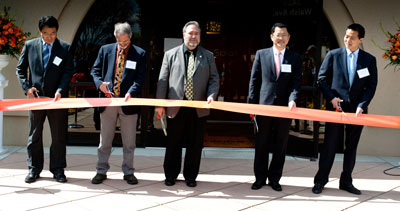 When one thinks about Silicon Valley, it’s not hard to think of high-tech chip, computer and software companies. Names like Intel, AMD, Apple, HP, Texas Instruments, Applied Materials, Google, and Yahoo typically come to mind. However, even given those blockbuster names, the valley is really made up of smaller companies that might not quite be household names.

“Hanwha Solar located this facility in Silicon Valley to tap into the region’s culture of innovation and technical expertise,” said Hee Cheul Kim, President of Hanwha Solar. “It is critical for a global company like Hanwha Solar to have a strong presence in California, because it is the epicenter of clean technology R&D. The investment being made in solar is a reflection of the confidence the Hanwha Group has in clean energy as a long term growth engine.”

Located on Walsh Avenue, Hanwha Solar invested $14 million into the 30,000 square foot facility that was designed with room for expansion. Thirty people will be employed at the R&D center, joining the 47 employees across the country. Over the past two years, Hanwha Solar has invested $50 million in the U.S., which has broadened their local presence and given the company access to advanced solar technology through strategic partnerships with businesses such as OneRoof Energy (located in San Diego), Crystal Solar (also located in Santa Clara), Solar Monkey (located in Irvine) and 1366 Technologies (located in North Lexington, MA). Hanwha Solar intends to make additional investments and increase the number of people it employs over the coming years.

“In solar technology, you can never rest on your laurels. Yesterday’s innovation can easily fade into obsolescence tomorrow. This center will keep Hanwha Solar on the next horizon of solar technology.”

Acknowledging their name isn’t very well known, Hanwha Solar has launched a national marketing campaign. Hanwha Solar kicked off the baseball season by partnering with the San Francisco Giants as their new official solar partner. Hanwha Solar will also launch a green initiative campaign named “I SUN SF” which will build on the Giants’ legacy of environmental responsibility. The campaign will include the installation of solar PV panels at AT&T Park; a Hanwha Solar sun-shaped LED sign next to the left field foul pole; a fundraising program, &How Far Did It Fly?& that will donate $1 worth of solar panels to the Boys & Girls Clubs of San Francisco’s Columbia Park Clubhouse, (along with letting fans know the distance and displaying it on the Hanwha Solar LED sign at the ballpark) and by sponsoring the Giants in-game recycling &Green Team.& For more information on Hanwha Solar, visit www.Hanwha.com.

Business
Author Jacob BournePosted on June 27, 2019
On June 14 the Santa Clara Chamber of Commerce announced at its “New Years in June” Awards Gala that the organization will now go...