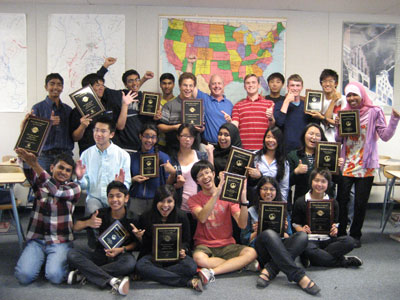 Wilcox High School teens have already taken on the challenge of world citizenship, becoming 21st century world problem solvers before they even graduate.

The U.S.-based, nonprofit educational organization World Savvy announced May 15th that the three student teams from the Wilcox World Affairs Club had won top national awards in the 2011 – 2012 World Savvy Challenge for students to collaborate in problem-solving around the global theme “Sustainable Communities.”

The senior division team “I Am Powerful” won first place for its plan to educate women so that they can assume more roles in society, better enabling their communities to thrive. They had placed second in regional competition with about twenty other schools March 17th in San Francisco.

“Women’s education is a problem in countries where a lot of our group come from, countries such as India, Yemen, and Chad. And each country has a different culture and religion,” says Afrah Mohammad, one of the nine team members.

The team was awarded $500 to initiate its plan this summer and will spend the money to build a website for a media campaign to raise awareness about the need to educate women.

The team quoted United Nations statistics that women do over 50 percent of the work in the world but earn just 20 percent of the world’s wealth. Through its website, the “I Am Powerful” team intends to raise donations to build schools for girls, funneling the funds to existing agencies such as CARE.

“Winning was shocking,” says Mohammad. “We’re proud that we’re going to do something that really affects the world.”

The Wilcox “JRR CLAASS” team of nine placed 3rd in competition in San Francisco and 4th nationally. Its “Animal Farm” plan aims to reduce the heavy debt of dairy farmers by using anaerobic bio-digesters to convert manure into natural fuels to produce energy.

“Santa Cause” placed first in regional website competition against thirty teams and fifth nationally for its web presentation “Fight for Green.” The presentation (visit http://wac.alvinho.info/) includes videos and a call to environmental action.

The 30 students in the Wilcox World Affairs Club started working on the World Savvy Challenge last August with club advisor and history teacher Steve Simoni. Three students also coached a Peterson Middle School team that earned first place in its regional division. To finance their projects, the students raised about $200 per team.

“I like working with kids outside the academic classroom and watching them grow and start to expand their views globally,” says Simoni. “I like seeing them start to think outside their group of friends.”

The regional presentations in San Francisco included a detailed Knowledge-to-Action Plan and a 15-minute creative performance of the students’ research and solutions, followed by 10 minutes of questioning by 10 judges. The national competition was judged online.

“You’re able to learn teamwork and the communications skills you need for your lifelong goals,” says Afreen Hasan, one of three World Affairs Club presidents, reflecting on the personal benefits of participating in the World Savvy Challenge.

The mission of World Savvy (www.worldsavvy.org) is to educate and engage youth in community and world affairs, closing the global competency gap in K-12 education and ensuring that students have the knowledge, skills and dispositions to thrive in our global community.