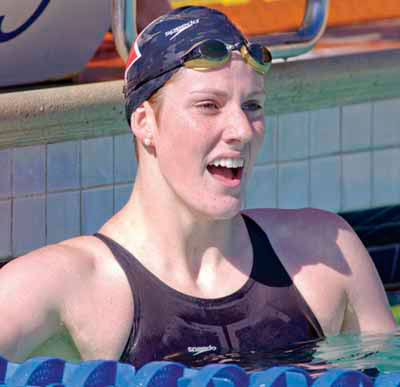 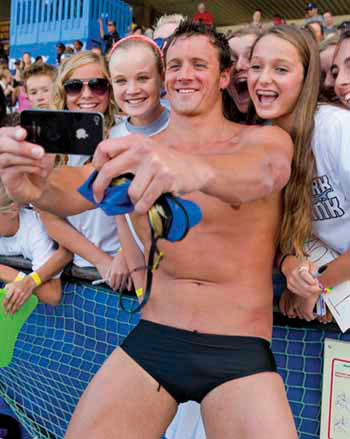 The George F. Haines International Aquatic Center was the place for some of the best world’s swimmers to compete May 30-June 2 when the final leg of the 2012-2013 Arena Grand Prix Series came to Santa Clara. The series gave the opportunity for the country’s top swimmers to race against some of the best competition from around the United States before the upcoming National and World Championships Trials.

Names that have graced the headlines of newspapers and magazines were there, and many performed well. U.S. Olympian Connor Jaeger set a new meet record to win the men’s 800-meter freestyle on May 30. Olympic gold medalist Missy Franklin won the 200-meter freestyle and 200-meter backstroke, making her the 2012-2013 Arena Grand Prix Series women’s champion.

On Sunday, local swimmers met and competed in a swimming relay with Aaron Peirsol and Janet Evans. Peirsol is a three-time Olympian and Evans is a four-time Olympic gold medalist. With swimmers of this caliber, the chance for young swimmers to sit down and talk was an event highlight. Rowdy Gaines, a three time Olympic Gold Medalist and NBC’s voice of swimming, served as emcee for Sunday’s event.

Piersol and Evans were asked questions about dealing with defeat despite their best efforts and echoed each other in responses. “You need to realize and understand you’re not going to win every time, and that’s okay,” said Piersol.

“People stay involved in swimming because they love it and how it makes them feel as well as the tight community of swimmers,” added Evans. “You have to love it with the 4:30 a.m. practices and all the work that’s required to excel, but with those challenges comes the excitement of accomplishment too.”

During the course of the talk, one swimmer asked about winning a gold medal. Fortunately, Gaines brought one of his and happily passed it around so the swimmers could do what few athletes get a chance to do – hold onto an Olympic Gold Medal. After the talk, the swimmers took part in a relay that saw Peirsol and Evans anchoring the two teams. In true sporting fashion, Peirsol and Evans finished in a tie, showing that having fun was the main event.